CNN’s Candy Crowley made an oblique reference to her colleague Anderson Cooper’s infamous “teabagger” remark on Monday’s Situation Room. As she reported on the race in New York’s 23rd congressional district, Crowley referred to Conservative Party candidate Doug Hoffman as “the choice of many on the right, including Sarah Palin, former House leader Dick Armey and ‘tea bag partyers’” [audio clips available here].

The CNN political correspondent detailed the different key races up in the November 3 election at the top of the 5 pm Eastern hour, including the New Jersey and Virginia gubernatorial campaigns. She closed her report with the New York contest: “And by way of marquee races, it’s hard to beat the soap opera of New York’s 23rd congressional district, where the Republican moderate dropped out over the weekend, leaving the race to a conservative, Doug Hoffman, the choice of many on the right, including Sarah Palin, former House leader Dick Armey and ‘tea bag partyers.’”

After playing a clip from former House majority leader Dick Armey, a leader in the Tea Party movement, Crowley, along with anchor Wolf Blitzer, highlighted the battle between the conservatives and the moderates in the Republican Party, just as their colleagues at CBS and ABC had done earlier in the day. 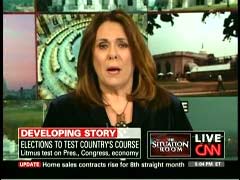 CROWLEY (on-camera): As for who might be despondent and who might be elated following Tuesday’s elections, one of the things you can look for, Wolf, is that this Tea Party group, these conservatives, are very jazzed at this point having forced really this Republican establishment candidate out of the race in 23. They are already talking about the races they want to take on in 2010, so it occurred to me that the Republicans could win all three races and still really have a big problem on their hands as to how they are going to navigate between the right of their party and the more moderate wing.

BLITZER: There’s concern they would push out the more moderate Republicans who in the big elections might have a better chance of getting elected than those more on the right.

BLITZER: Candy, thanks very much.