CNN’s Anderson Cooper became the first on his network to acknowledge that some of the quotes used against Rush Limbaugh in his NFL bid were false on his program on Wednesday: “I also should point out, on this program, we did not use the wrong quotes.” Cooper also brought back Al Sharpton as a guest, and the activist again brought up Limbaugh’s “Crips and Bloods” remark, which he took out of context [audio clips are available here].

The CNN anchor began by noting how the talk show host had been forced out of his part in buying the St. Louis Rams by the controversy: “Tonight, breaking news: Rush Limbaugh sidelined, his bid to buy into the National Football League sacked. What happened, and is it fair?” After giving a recap of the controversy, Cooper introduced his guests- Sharpton; Stephen A. Smith, whose has consistently expressed sympathy for talk show host’s bid; and talk show host McGraw Milhaven from St. Louis.

Cooper first hinted that the slavery quote attributed to Limbaugh was false in one of his questions to Smith: “Was the criticism fair, though? Some of the quotes attributed to him- you used one of them about the slavery- that was not something he ever said.” Smith acknowledged his hasty use of the quote, but continued that the talk show host was still a racially-divisive figure:

SMITH: We found out- I should have said reportedly. The other quote was accurate, but the point is, is that there were a plethora of quotes that are online, for example, that he has adamantly and emphatically denied, and nobody has found that there's any truth to that. But he is the same guy who did say that the NFL was like- you know, watching the Bloods and the Crips without any weapons. He is the guy that caused the big stir with the whole Donovan McNabb controversy back in 2003. So, it's not like he has no history of being racially inflammatory to some degree.

After Cooper played a clip from Limbaugh where he attacked Sharpton’s role in this, the black activist defended his conduct in the controversy: “I was very clear in the letter to the NFL the two quotes, both of which he has admitted saying, both of which established his remarks against NFL players, and against Donovan McNabb. These other quotes, I did not quote- didn't use. So, I'm not going to defend what I didn't say.”

Cooper later played another clip from the conservative host where he clarified that his “Bloods and Crips” comment was a criticism of a “mind-set that is destructive, and it was not helpful. It was not racial. Bloods and Crips makes it look racial, but the way I chose to describe it- I could have perhaps chosen a different term.” But no one, neither Cooper nor his guests, provided the full context of Limbaugh’s comment, which he made on his program on January 19, 2007. During one of the segments that day, the talk show host was criticizing some of the out-of-control antics of certain NFL players on the field, specifically referencing a game the previous weekend where such behavior took place (the following transcript is taken from his website).

LIMBAUGH: Now, LaDainian Tomlinson to me is the classiest player in the National Football League. He doesn't do a dance, he doesn't spike the ball when he scores. He and Marvin Harrison are the two most classy individuals playing in the National Football League today, in skill positions. They just hand the ball back to the referee. They act like they've been there and done that, like scoring a touchdown is no big deal, they don't taunt, they don’t act like they've been dissed or any of this. Let me tell you, the Chargers would not have lost that game were it not for a bunch of -- I gotta be very careful here. It's not just irresponsible, but there is a cultural problem in the NFL that has resulted in a total lack of class on the part of professional players....There's something culturally wrong here that is leading to all this. It’s gotta be dealt with at the top, because it simply is classless....It's just disappointing, and it's a mystery to me why it's being allowed to continue.

Before proceeding further, note how the conservative complimented LaDanian Tomlinson and Marvin Harrison, two black NFL players. Now if Limbaugh was the racist, bigot, and/or racially-divisive character that he has been painted as, why would be lauding these two athletes?

The host then went to a commercial break, and since he had a very short segment afterwards (likely before the top or the bottom of the hour), he made a quick comment, which included the now-notorious “Bloods and Crips” phrase:

LIMBAUGH: Look it, let me put it to you this way. The NFL all too often looks like a game between the Bloods and the Crips without any weapons. There, I said it.

So there’s the context of the “anti-NFL remark,” as Sharpton put it. 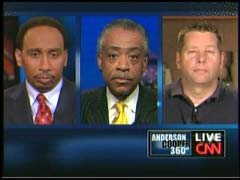 At the end of the discussion, Cooper turned to Milhaven to give the “final thought.” The St. Louis talk show host defended Limbaugh and ripped Sharpton: “You know what? Unfortunately, there are some thugs who play in the NFL. You got Michael Vick....You have Leonard Little, who murdered somebody. You have Pacman Jones. Roger Goodell has tried to crack down on the thug image of the NFL. So Rush Limbaugh, while he...could have said it a little bit better, the point is that there are thugs in the NFL. This is a high-tech lynching. You made up quotes just because you don't like his politics.”

The CNN anchor defended the black activist: “Reverend Sharpton's point is, he didn't make up any specific quotes. The quotes that are being cited, other people were using.” Sharpton then came in to repeat that “The quotes I said, he said he said, and the fact that you can name four or five thugs does not give you the right to call a whole industry Crips and Bloods.” Cooper concluded by making his own clarifying statement about the false quotes: “I also should point out, on this program, we did not use the wrong quotes as well.”

Note that he said “on this program.” That could be a hint about how his colleague Rick Sanchez used the false slavery quote attributed to Limbaugh and, as of early Thursday afternoon, has yet to retract his use of it.