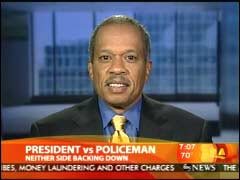 NPR’s Juan Williams criticized President Obama’s “the police acted  stupidly” response to the arrest of Henry Louis Gates during a segment on Friday’s Good Morning America: “The president has gone way, way too far without having looked at the police report, without knowing the facts of the case.” He later recommended that the president “walk it back and say, you know what- I spoke out of turn here.”

Anchor Chris Cuomo sought Williams’s take on the Democrat’s now infamous remarks on the detainment of the Harvard professor just after the beginning of the 7 am hour. He first brought up a standard mainstream media race question: “Do you think the police would have acted the same way, if Gates had been a white man?” The NPR analyst replied that he wasn’t sure, and gave an anecdote of his experience growing up in Brooklyn: “I don’t know the Cambridge police intimately....I grew up in Brooklyn during the ‘60s, and had...sort of a tense relationship with police- especially white police- as a young, black kid.”

Williams continued by giving his first critical analysis of the president’s answer: “My concern about the president speaking out here is, I’m not sure he saw the police report, where you can read that Gates was- had become rather aggressive with the cop...The cop was responding to a report of a break-in at the house, and by Gates’ own account, he tried to force his way into his own house, and that house had been broken into previously.”

Cuomo went back to the NPR’s analyst’s earlier remark about his “concern about the president speaking out” in the Gates arrest controversy in his last question: “Let me ask you this- what is the president’s right move in this situation? After getting out in front of it, did he get out too far? What should he do now?”

Williams answered, “He got out way too far....the president has gone way, way too far without having looked at the police report, without knowing the facts of the case. And so, I think what he now has to do is walk it back and say, you know what- I spoke out of turn here. Skip Gates- Professor Henry Louis Gates is a friend of mine, and I was reacting to- in support of a friend, and aware of larger racial issues in the society. But it really doesn’t specifically apply to this case, which is not about racial profiling.”
Race Issues Liberals & Democrats Racism ABC Good Morning America Juan Williams Henry Louis Gates