ABC's Cuomo: Is GOP Being 'Reckless' With Health Care Reform?

ABC anchor Chris Cuomo played the liberal emotion card and asked California Governor Arnold Schwarzenegger during an interview on Wednesday’s Good Morning America if Republicans were “playing politics” with President Obama’s health care “reform” proposal, and whether this was turning into a “little bit of a reckless situation” on the part of the GOP. [audio available here]

Cuomo first put the health care issue in the context of California’s budget woes, and started out of the gate with his plea to people’s emotions in his first question to the governor: “Your state is somewhat of a window into the reality of health care. You’ve been pictured at your desk with a big knife, having to cut the budget- over $1 billion in health care cuts. It’s going to affect low-income families. It’s going to affect the coverage that children get. Is this absolutely necessary?”

After Schwarzenegger’s answer, the ABC anchor then turned to the president’s proposal for health care “reform,” and asked the liberal Republican governor why he supported it. The former actor clarified that he didn’t 100% support Obama’s plan, “because I don’t know exactly what is in that bill. It changes all the time, as you know.” Cuomo followed up by asking if he was leaning towards supporting it. Schwarzenegger again didn’t give a solid answer.

Following a couple of questions on the possible rise in taxes on the top tiers of income earners to pay for the president’s plan, Cuomo played a clip of Mr. Obama accusing his Republican opponents of “dust[ing] off that old playbook” from the 1990s when the GOP opposed former President Clinton’s health care plan. The ABC anchor both appealed to the governor’s apparent political reputation, and returned to his use of the emotion card in his following question: “You’re always honest about both political parties. Governor, do you believe that the Republicans are playing politics here, at the risk of people’s health care?” When Schwarzenegger answered by agreeing to his central point, Cuomo, seemingly unsatisfied by his response, pushed forward by asking his “reckless” question: “Of course, there’s always politics going on. The question is, is it upstaging the need to help people right now? Is this getting to be a little bit of a reckless situation?”

The ABC anchor concluded the interview by asking the governor, who is married to a member of the Kennedy clan, if President Obama “needs to call out the ‘lion’ ...Senator Ted Kennedy? This is not surprising, as Cuomo is obviously a member of another family of Democratic politicans.

The full transcript of Chris Cuomo’s interview of Governor Arnold Schwarzenegger, which began six minutes into the 7 am Eastern hour of Wednesday’s Good Morning America: 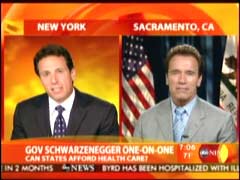 CHRIS CUOMO: Now, obviously, this health care push is going to be mean a lot for states- they’re already slashing their budgets. This is especially true in California, where Governor Schwarzenegger is facing a $26 billion shortfall- that means putting funding for health care on the chopping block, and his state is in the red-hot center of the health care debate as a result. I asked him about what he’s doing there, and what he thinks about the president’s prospects for change.

CALIFORNIA GOVERNOR ARNOLD SCHWARZENEGGER: Well, you know, when you have a $26 billion shortfall in revenues, then you have to go and do a combination of things. And one of the things you have to do is make deep cuts in various different programs. But the important thing, at the same time is- is that the cuts are not just cuts. They’re also coming from reforms- very important reforms in welfare, for instance, or in in-home services. So, there were good things that happened. But also, it was, without any doubt, a tough budget, but a necessary budget.

CUOMO: Many governors do not support President Obama’s health care bill because of what it will mean to their budgets. You do support Obama’s bill. Why?

SCHWARZENEGGER: Well, first of all, I cannot say that I support exactly everything that is in the health care bill because I don’t know exactly what is in that bill. It changes all the time, as you know. What I have said was- and I told this to the president- that I would support him 100% in health care reform because I think it’s necessary. It’s inexcusable that we have 48 million people in the whole United States that are uninsured. So I think we need health care reform, and it has to be done the right way.

CUOMO: Well, just to be clear, are you leaning towards supporting what the president has been talking about? I mean, he’s put out lots of information. Which way are you leaning at this point, Governor?

SCHWARZENEGGER: I’m leaning towards reforming health care in America, and I think the whole idea of having everyone insured is a great idea, and I think it’s also important to put a lot of emphasis on cost controls, because we’ve got to bring the costs down. I think that he’s right on the mark on that one, and I also like his whole idea of prevention.

CUOMO: And what do you think about what it could mean to the tax burden? There are estimates that for the top level of Americans in their tax bracket, over 55% of their money could go to one government agency or another. I don’t have to tell you, as a top earner yourself, how big a burden that could be. What do you think of that?

SCHWARZENEGGER: Well, first of all, I don’t think that you can get anything like that done without paying for it. So, we have to pay for it somehow. I think the trick is just to find a way of doing it so it makes sense.

CUOMO: Well, if that is the reality, that the top tier of earners in America is going to be paying over 55% in taxes, do you think this bill will make it?

SCHWARZENEGGER: I don’t think so. I think that you have to come up with interesting ways of funding this health care, and we have, for instance, done different things here in California. We have tried to do- you know, go to the tobacco industry, and try to get some money- some money from the hospital association- some money from the employers. So, we kind of spread it and sprinkled the responsibility all over, so that no one particular category gets hit too much.

CUOMO: There’s a lot of politics going on here that may determine the fate of the bill. Let me play you some sound here of what the president said about what may be going on in DC.

PRESIDENT BARACK OBAMA (from PBS interview): There are folks who think that- you know, we should try that- you know, dust off that old playbook. What they don’t recognize is that, this isn’t about me. It’s about the American people, and things have gotten worse since 1993.

CUOMO: You’re always honest about both political parties. Governor, do you believe that the Republicans are playing politics here, at the risk of people’s health care?

SCHWARZENEGGER: Well, hello? (laughs) I mean, since when has there anything been done in Washington or here in Sacramento, or at any capital where politics didn’t play a big role in the- in the outcome? I think that- yes, politics is in there. I think that it is very clear that it’s a sensitive issue, and Republicans will use that, if you raise taxes.

CUOMO: Of course, there’s always politics going on. The question is, is it upstaging the need to help people right now? Is this getting to be a little bit of a reckless situation?

SCHWARZENEGGER: Well, look- I think that it is nothing unusual because every time you try to address big issues like that, you always run into this problem- that people make decisions based on what’s- you know, good for the politics.

SCHWARZENEGGER: Well, the question is, if Senator Kennedy is capable to be out there and campaigning, because, as you know, he’s fighting brain cancer. But I think that he was a very important player to get it as far as it is today, and so, I think he has done his share. I think that now, the people on Capitol Hill and the president have to pull it off, and just- you know, close the deal.

CUOMO: All right, governor. Thank you so much.

SCHWARZENEGGER: Thank you very much.