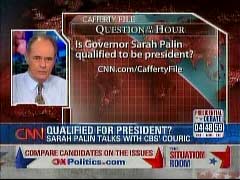 CNN commentator Jack Cafferty has full-blown Palin Derangement Syndrome. In his latest slam of Republican vice-presidential candidate on Friday’s The Situation Room, Cafferty labeled Palin’s interview with CBS’s Katie Couric "one of the most pathetic pieces of tape I have ever seen from someone aspiring to one of the highest offices in this country," after he played a clip of the Alaska governor making an awkward reply to a question. He then asked, "Is Governor Sarah Palin qualified to be president?" When host Wolf Blitzer replied to this comment by stating that "she's cramming a lot of information," Cafferty blasted back, "There's no excuse for that! She's supposed to know a little bit of this....You know, don't make excuses for her! That's pathetic." Of course, the CNN commentator only read negative replies to his question near the end of the 4 pm Eastern hour of the CNN program.

Since McCain named Palin as his running mate on August 29, 2008, Cafferty has devoted 35% of his "Questions of the Hour" on The Situation Room to the Alaska governor, or about once a day. He asked on that very day whether "John McCain undercut his own message by naming someone even younger and more inexperienced than Barack Obama to be his running mate?" During the 15 broadcast days that he has been present on the CNN program since the announcement, there has only been one day where he didn’t mention her during his "Cafferty File" segment -- September 25. As early as September 3, he asked, "Should John McCain consider replacing Sarah Palin on the GOP ticket?" The day before, he asked whether Palin had been "properly vetted before being named John McCain’s V.P."

Only 4 out of the 14 "Cafferty File" segments which he has devoted to Palin have been more neutral. On September 3, the same day he asked whether McCain should consider replacing the Alaska governor, he asked, "What do you hope to learn about Sarah Palin from her speech tonight?" After taking several days off from CNN due to the death of his wife, Cafferty returned on September 15 to ask, "Which woman has more credibility with the average American, Sara Palin or Hillary Clinton?" On September 22, he wondered, "What will Sarah Palin and Hamid Karzai talk about?" The following day, he offered a question with a hint of lament: "What does it say that Sarah Palin is meeting with heads of state at the UN while Hillary Clinton is hosting Farm Day?"

Cafferty used the remaining six "Cafferty File" segments to cast doubt on Palin’s candidacy. On September 4, he stated that "when it came to solutions to America’s myriad problems, Palin was noticeably lacking." He then asked as his "Question of the Hour," "Does Sarah Palin help or hurt John McCain’s chances of becoming president?" Twelve days later on September 16, after detailing how her husband and several of her aides had been subpoenaed in the so-called Troopergate investigation, he asked, "What does it mean that Gov. Sarah Palin is refusing to cooperate with the investigation into the firing of her public safety commissioner?"

The following day, the CNN commentator quoted from a prominent liberal columnist to criticize governor’s popularity: "In today’s New York Times, columnist Maureen Dowd suggests the Palin phenomenon is like a trip back to junior high school…where the popular girl gets all the attention." His "Question of the Hour" in response: "What does it say about us that Sarah Palin is attracting more attention than the two men who would be president?" Cafferty concluded that week by bringing up the Troopergate investigation on September 18's Situation Room and by asking whether "Sarah Palin’s 15 minutes of fame" was over on September 19.

Before taking his day-long hiatus from talking about Palin on September 25, Cafferty ripped into the McCain campaign for not allowing reporters to have more access to the Alaska governor: "Yesterday’s photo op at the United Nations between Sarah Palin and Afghan President Hamid Karzai was a joke." But on this occasion, he didn’t directly criticize Palin.

Cafferty took much more time to criticize Palin’s opponent, Joe Biden. In fact, the first time that he said anything critical of the Democratic vice-presidential candidate during his "Cafferty File" segment was on Friday’s Situation Room. The CNN commentator, during the 6 pm Eastern hour of the CNN program, detailed the Delaware Senator’s recent gaffe during a recent interview with Couric in which he claimed, "When the stock market crashed [in 1929], Franklin D. Roosevelt got on the television and didn't just talk about the, you know, the princes of greed. He said, ‘Look, here's what happened.’" Herbert Hoover was president, not Roosevelt; and television didn’t yet exist as a news medium. The CNN commentator then pondered, "Is Joe Biden an asset or a liability for Barack Obama?"