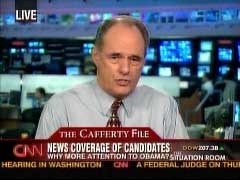 CNN personalities Jack Cafferty and Howard Kurtz made a sudden confession of the mainstream media’s imbalanced coverage of Barack Obama versus John McCain on Thursday’s "The Situation Room." First, in his 5 pm Eastern hour "The Cafferty File," Cafferty labeled the media’s planned coverage of Obama’s first overseas trip since becoming the presumptive nominee an "extravaganza." He then gave some disclosure concerning the breakdown of the coverage between the two presidential candidates: "The three broadcast network newscasts, which have 20 million viewers combined, spent about 114 minutes covering Obama since June, compared to 48 minutes for McCain. Obama's been on the cover of Time and Newsweek 12 times in the last three years -- five for John McCain." Despite this admission, Cafferty gushed as predicted that Obama would be received in Europe "like the Rolling Stones tour coming to town." Later in the hour, Kurtz picked up the same theme and gave some more details about the imbalance in coverage in another report.

Besides giving the details of the major differences in coverage between the two presumptive presidential candidates, Cafferty gave the scope of the demand in the mainstream media to cover Obama’s trip overseas: "All three broadcast network anchors will join him, broadcasting their nightly newscasts from stops along his route. Also along, to record Obama's every move, are top political reporters from major newspapers and magazines all over the country. Two hundred journalists requested to accompany Obama on the trip. But the campaign says they're only going to be able to accommodate about 20 percent of that number, or around 40 or so."

Cafferty also tried to give a justification for this gap between the candidates: "The television executives, of course, have lots of reasons for why the Obama trip is such a big deal. It's his first overseas trip since becoming the presumptive nominee; he's a fresh face in politics; his campaign is historic; and he's the first African-American to ever head a major ticket in the run for the White House; and there is an overwhelming interest in Barack Obama overseas. Those are all valid reasons. But that doesn't mean John McCain has to like any of it." He then proposed his "Question of the Hour:" "Why does Barack Obama get more news coverage than John McCain?"

After proposing this question, Cafferty turned to Blitzer and told him about Gallup’s prediction that "[Obama’s] trip... has the potential to change the race. Those are their words." When Blitzer asked what was meant by this, Cafferty answered, "Well, I guess it would have the potential to go either way. But I got the feeling, reading what they were writing, is that if he doesn't make any huge mistakes, he could do himself a lot of good here." Blitzer replied, "Because you know he's going to be very, very enthusiastically received in Europe. There's no doubt about that." Cafferty agreed with this prediction: "They can't wait. I mean, it's like the Rolling Stones tour coming to town." 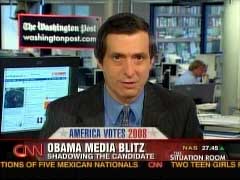 About forty minutes later, Kurtz gave the following report about the upcoming media "extravaganza" surrounding Obama’s trip. At one point, he bluntly indicated that the Big Three networks were doing "exactly what the Obama camp wants."

KURTZ (voice-over): The three broadcast network anchors will travel halfway around the world, lured by an offer of interviews with the candidate, with Katie Couric, Brian Williams, and Charlie Gibson getting an exclusive on successive nights. That means the CBS, NBC, and ABC evening newscasts will do exactly what the Obama camp wants -- use their big megaphones to certify the trip as a major campaign event. The television chatter is already starting, including on CNN, which will also be all over the story.

BILL SCHNEIDER, CNN SENIOR POLITICAL ANALYST (on-camera, file video): Obama will shortly be heading to the Middle East, and intends to show how much he knows about the threats the U.S. faces.

CHRYSTIA FREELAND, FINANCIAL TIMES (file video from MSNBC): The economy is in bad shape, but I think this trip by Obama is risky, but brilliant.

KURTZ: Of course, it's always big news when a presumed presidential nominee travels abroad, right? Wrong -- John McCain has taken three trips abroad to Europe, the Middle East, Canada, Colombia, and Mexico in the last four months. No anchors tagged along. In fact, some broadcast and cable networks didn't even send correspondents on some of these trips. The imbalance doesn't end there. Obama has received more than twice as much air time as McCain on the network evening newscasts since last month, although more coverage doesn't always mean positive coverage. Obama, who is on the cover of Newsweek again this week, has been on Time or Newsweek's cover a dozen times in the last three years, more than twice the amount of McCain. And in some venues, Obama and his wife Michelle on the cover of Us Weekly, Obama and his family on Access Hollywood. It's not even close.

KURTZ (on-camera): With Obama expected to draw big crowds in Europe next week, McCain may struggle to stay in the headlines. Now, journalists say much of this is driven by the novelty factor. Obama is a new player on the world stage, while McCain has been making international trips for decades. But at what point does that become unfair? Wolf?

Immediately after Kurtz’s report, Cafferty read some of the viewer replies to his "Question of the Hour." Two of the replies are worth noting. A Bob in California wrote, "Real simple. The media hacks like you are selling the Obama con job." Another viewer named Laura used more subdued language, but made the same point: "Give me a break. Obama is no more exciting than anyone else. He's the same old thing wrapped in a different type of bow. The reason he gets more coverage is simple, and everything you and your colleagues have denied for months now is the reason -- media bias."