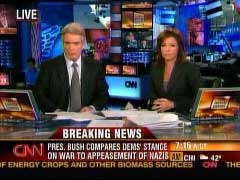 Minutes after President Bush began his speech to the Israeli Knesset, CNN quickly channeled outraged Democratic reaction to his "false comfort of appeasement" remark. "American Morning" co-host John Roberts, in a brief on the speech, claimed the President was "suggesting that Senator Barack Obama and other Democrats are in favor of appeasing terrorists in the same way that U.S. leaders appeased the Nazis in the run-up to World War II," though the President did not mention any Democratic official or the Democratic Party.

The graphic on the screen also reflected this belief that Democrats were being unfairly smeared: "Pres. Says Obama, Other Dems Want ‘Appeasement of Terrorists" and "Pres. Bush Compares Dems’ Stance on War to Appeasement of Nazis."

Ten minutes later, Roberts again read a brief on the President’s remark, but this time gave a bit more detail. "President Bush, speaking before the Knesset in Israel... saying that Barack Obama, without mentioning him by name, but saying basically that Barack Obama and other Democrats favor a policy of appeasement of terrorists, in much the same way that U.S. leaders did prior to World War II.... Our Ed Henry is on the story. He's just getting some of his ducks in a row here, and will be joining us in a couple of minutes with more on that."

After a short interview of a newly-elected mayor in Oklahoma, CNN correspondent Ed Henry gave a live report from Jerusalem on the President’s speech. After a playing a clip of the relevant portion of the speech, Henry again clarified that "President Bush never uttered the words Barack Obama. But White House aides are acknowledging that this was a reference to the fact that Senator Obama and other Democrats have publicly said that it would be okay for the U.S. President to meet with leaders like the Iranian President Mahmoud Ahmadinejad." Henry’s comment about the White House aides contradicts what the New York Times itself initially reported, that "the White House said his remarks were not aimed at the senator."

Henry then continued about John McCain’s recent remarks about Obama being the favorite presidential candidate of Hamas. "...[L]ast week, Senator McCain suggested that Obama was the favorite candidate of Hamas, the terror group. Last week, Obama called that a smear." Henry thus continued CNN’s omission of the fact that the political advisor to Hamas’ political leader had communicated the terror group’s endorsement of the Illinois Senator.

"American Morning" continued to cover the supposed attack on Obama for the next ten minutes, asking correspondents Suzanne Malveaux and Dana Bash for the Obama and McCain camps reaction to the remark. After the commercial break, Roberts interviewed Robert Gibbs, the communication director of the Obama campaign. Roberts did bring up Obama’s past comment that the Senator "would sit down with the leaders of these countries without precondition," and how that was "fairly controversial." He continued by making a fair point in his question: "So for President Bush to say that leaping immediately to the leader level might not be a policy the United States wants to follow -- does he have a point there?" By asking this, Roberts continued this reading into the President’s remarks. He also didn’t follow-up to any of the points that Gibbs made during the interview.