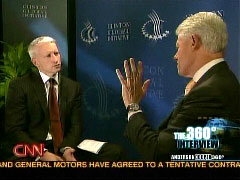 CNN’s Anderson Cooper interviewed a "squinting" Bill Clinton for a segment on Wednesday’s "Anderson Cooper 360" (a 2-minute clip was featured on Wednesday’s "The Situation Room"), and if there was speculation on why Cooper, instead of someone "higher up the food chain" like Wolf Blitzer, interviewed Clinton on the occasion of the "Clinton Global Initiative" annual meeting, it could be because Cooper is one of the "featured attendees" at this meeting. Cooper moderated a "working session" panel discussion on Wednesday on "The Most Effective Strategies for the Most Vulnerable Children."

Besides the panel discussion Cooper moderated, among the other topics being discussed at the "Clinton Global Initiative" annual meeting include "Stabilizing the Climate: Pathways to Success;" "Promoting Growth and Fairness;" and the peculiarly-named "Addressing Under and Over Nutrition."