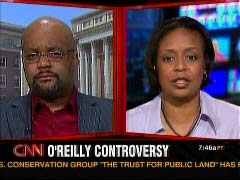 Even after the Juan Williams "idiots at CNN" rebuke, CNN still pressed on about Bill O’Reilly’s race remarks, and a guest on Wednesday’s "Newsroom" took the language being used against O’Reilly and Williams to new lows. Syracuse University professor and blogger Boyce Watkins appeared on the CNN program, and compared O’Reilly to a murderous movie villain and to Iranian tyrant Ahmadinejad. "If the villain in a movie comes up and says, 'I love you very much,' that usually means he wants to kill you. The fact is that Bill O'Reilly is a guy who has made a career demeaning, degrading, and devaluing every black institution he can get his hands on.... You know, he's about like Mahmoud Ahmadinejad, when it comes to making ridiculous assertions and waiting for people to respond."

After his villain/Ahmadinejad comparison, Watkins blasted NPR host and Fox News contributor Juan Williams for coming to O’Reilly’s defense. O’Reilly’s race comments had come from an hour of his radio program that involved a segment with Williams. "Juan Williams sitting there, is sort of the 'Happy Negro' agreeing with Bill O'Reilly, doesn't impress me at all. A man cannot walk into your home and congratulate your mother for not being a prostitute and not expect you to be offended."

Boyce Watkins appeared with fellow blogger and NB contributor La Shawn Barber during the 10 am Eastern hour of "Newsroom." Prior to their segment, host Heidi Collins played a report by CNN correspondent Mary Snow, which recapped the whole O’Reilly "affair," including sound bites from CNN contributor Roland Martin (from an interview on "American Morning" in which Martin was critical of O’Reilly) and CNN host Rick Sanchez, who had talked to O’Reilly for a segment on his program.

Barber later took issue with the "Juan Williams is a Happy Negro" characterization by Watkins.

BARBER: You know, that the 'Happy Negro' comment about Juan Williams was totally uncalled for. That's the kind of ad hominem that we have to deal with....

BARBER: And you know, these people are going to talk about O'Reilly and they're doing the same things. Put the man's comment in context. I'm not a Bill O'Reilly apologist. He does say outrageous things, but that's what he does. It's not that big a deal. It's really not that big a deal given the context ...

Boyce Watkins also went over-the-top in portraying Bill O’Reilly’s impact on race relations. Note how Heidi Collins does not challenge any of the previous statements Boyce Watkins made about O’Reilly.

COLLINS: Okay, so Boyce, so far, you've called him a villian and you've compared him to Mahmoud Ahmadinejad. Other people are comparing what he said to what Don Imus said about the Rutgers basketball team. Is that a fair comparison to you?

WATKINS: Well, I think it is. It is actually a fair comparison. It's only unfair to the extent that actually O'Reilly has done more damage than Imus. It's like comparing 9/11 to the Iraq War. More people have died in Iraq, but in 9/11, it was more traumatic, so people would consider that to be a more devastating event. Don Imus's clash sort of came all at once, where as O'Reilly's -- his pain has sort of been evolving through time, and I think he needs to be challenged and he needs to understand that people are going to come back at him if he makes these sort of offhand remarks about stereotypes in the black community. He may think he's complimenting us, but the fact is that it was an insult.

Earlier in the segment, Collins addressed the following questions to Barber. " La Shawn, what is this story about? Is this about race? Is this about the way things come across on television? Is this about a battle between CNN and Fox?" Barber’s answer:

BARBER: I think this is a lot of media-generated nonsense. I, personally, as a black person, wasn't offended by what O'Reilly said. If you actually listen and read his comments -- listen to and read his comments and context, it becomes clear that he and Juan Williams were talking about the violent, profanity-laced element of the gangster rap culture. And Bill O'Reilly was trying to make the point that people -- white people who don't know black people or aren't exposed to black people, may get the impression that gangster rap culture represents black Americans. Well, we know that's not true. So, he may have expressed it awkwardly. I have to admit that it was kind of an awkward way he said it, but it wasn't offensive to me, given the context in which he spoke.

"Media-generated nonsense" - that’s a good description of this whole affair.