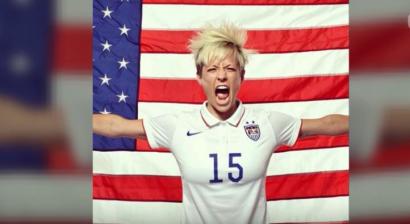 While you’re at it, stop by The Atlantic for a tutorial on why Team U.S.A. has lefties sounding like red state jingos. (Talk about embarrassing.) Staff writer and super-fanboy Franklin Foer has an encomium to Megan Rapinoe, the angry, outspoken lesbian cocaptain of the squad. Needless to say, Rapinoe’s a good player, but, gosh, everything about her blows wind up Foer’s skirt. Best of all, she hates Trump, and seems pretty dubious about the country she’s supposedly representing.

In short, she’s the perfect role model for male lefties. Foer wants you to tell your kids “that Megan Rapinoe is her generation’s Muhammad Ali.”

To be sure, “Long before she picked a fight with Donald Trump, before she took a knee in solidarity with Colin Kaepernick, Rapinoe was a player to savor,” says Foer. But it’s her lavender hair that inspires his purple prose.

Through her example, Rapinoe has instructed the world on how to play soccer and how to dissent. Her genius is that her political commitments, her public persona, and her playing style are one and the same. In every realm, she is fearlessly open, outrageously joyous, and unabashedly true to herself.

Oy! Easy Frankie. Give that adverb gland some rest. (And we haven’t been lacking for examples of how to dissent. You just put on a black mask and whack old men with your tire iron, right?)

But Rapinoe has inspired Foer to world champion-level blather: “Her political statements are … cleverly improvised and brimming with heart.” The “radical individualist’s” “brassy bravery” “invited a splenetic counterattack on Twitter from the president himself.” (Uh, sorry, but any remotely famous person who couldn’t provoke a Trump tweet is doing it wrong.)

But here’s the best part: “When she talks about soccer,” Foer enthuses, “she incessantly returns to the phrase self-expression. What she means is that she self-consciously thinks about her performance on the pitch as an outlet for her creativity.”

Self-expression? Yes, it’s a lefty fetish, so why not honor soccer solipsism? “In pursuit of self-expression, she permits herself moments of audacity — where she shoots from a peripheral locale or attempts to impose an implausible arc on a pass. If she self-censored her play, she would never take the risks that characterize her game, all those feints and jukes.” Mmm hmm. A straight guy who makes the game about himself is a ball hog, hot-dogger or selfish player. A woke feminist who does is being inspiringly true to herself.

And by the way, the self-expression fetishists weren't so thrilled when a devoutly Christian prospect for the World Cup team didn't want to wear a rainbow "Pride" jersey. But some self-expression is more super neat than others.

And now she’s wandered into the ultimate confluence of dramatic events. In her likely final tournament, she is the face of an epic struggle for equality and is rhetorically jousting with the most powerful man in the world. She has the chance to repeat as world champion and deliver a devastating blow to the patriarchy.

I’m sure patriarchy is shaking in its wingtips, but that’s an awful lot to put on a soccer player with a lousy grasp of economics (her struggle for equality involves demanding to be paid like a man in a league that doesn’t generate anywhere near the revenue the men’s does). As noted above, the most powerful man in the world is addicted to twitter fighting and he’s not particular who he takes on. And did I mention that she plays soccer?

But to Foer, this is deadly serious stuff. See, Rapinoe, with her “explosion[s] of joy,” is “deeply countercultural” because “youth soccer has become another emblem of the fretful American meritocracy that, in its grim pursuit of victory, induces a paralyzing fear of failure in kids.”

If only it would do the same to super-jazzed fanboy Atlantic writers.