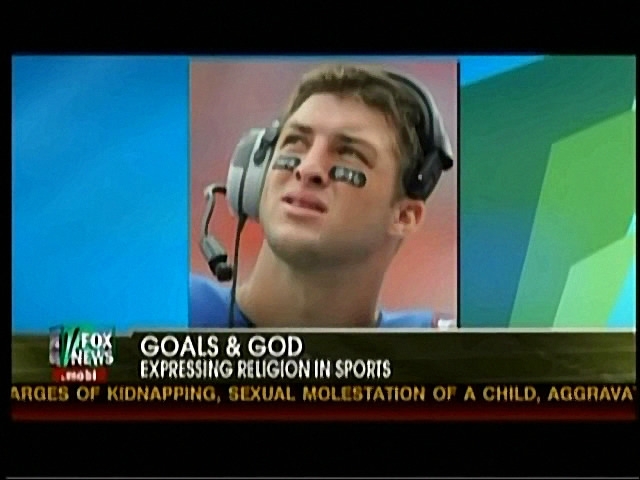 Americans love to talk sports. Polite Americans don't talk religion. So when those two things meet, the news media has no idea what to make of it.

Unfortunately for journalists, sports and religion - Christianity in particular - seem to be publicly mingling more often these days. Some star athletes are more outspoken in their faith, while many others regularly find themselves in need of spiritual, if not legal, redemption.

Liberals in the media don't understand religion and religious people, so when they surface on the playing field, the resulting coverage veers wildly from awkwardly respectful to clueless to downright contemptuous.

Fox's Brit Hume caused a firestorm by suggesting on air that Tiger Woods could find "forgiveness and redemption" in Christianity, rather than the casual Buddhism the golfer has said he practices. Woods, whose marriage and career are in melt-down because of his serial infidelities, should "turn to the Christian faith, and you can make a total recovery and be a great example to the world," Hume said. And in doing so, the former anchorman committed several mortal sins in modern secular America.

The Atlanta Journal Constitution's Jay Bookman attributed Hume's remarks to "arrogance," and posited that religious belief "is a private matter between that person and God, and is not a matter to be judged by some pompous TV anchor." Subsequently, Bookman said Hume had been "crass and rude" for subjecting Woods' Buddhist faith to "judgment and belittlement."

Bookman was just one among many voices. MSNBC's David Shuster suddenly became concerned for Christianity's dignity, worrying that Hume had "denigrated" it. His colleague Keith Olbermann compared Hume to Islamic extremists and accused him of "threatening" Woods into converting. U.S. News & World Report's John Aloysius Farrel said Hume's suggestion was "creepy" and "stupid." And when Hume subsequently remarked in a radio interview that "Jesus Christ" could be the two most controversial words in the English language, Time Magazine's James Poniewozik accused him of "crying anti-Christian persecution." All because Hume dared to suggest that Christianity offered an answer - maybe one that another religion did not.

But while they yelled loudest about Hume's comparison of Christianity and Buddhism, Hume's real sin was to introduce religion into the public discussion at all. Bookman gave that away when he wrote:

In fact, if Hume had merely said on air that his own Christian faith had helped him through hard times and that Woods might benefit from it too, I'd find it hard to object much. (Such a statement would have seemed odd and out of place from a political commentator on a news show, but that's another issue.)

All the outrage obscures the truly remarkable aspect of the incident: Hume actually expressed an interest in Woods' personal well-being. The non-stop coverage of Tiger's scandals has included plenty of speculation about his golf career and endorsement empire, along with the predictable salacious gossip. Hume injected a sober, humane note into the cacophony, but because its religious nature outraged the arbiters of acceptable public discourse.

Had Tiger Woods been, say, a Hollywood actor who'd self-destructed, rather than the world's greatest golfer, Hume's religious suggestion might have gone unnoticed. But Woods is a professional athlete. What's the difference?

If you enter the words "football as" into Google, the first suggestion the search engine offers is "football as religion." Try "baseball as" and "baseball as a road to god," is among the first few suggestions. Both deeply personal and communal, sports clearly share many attributes with religion, and Americans take them very seriously.

In fact, despite all the clichés about how "football is a religion" in the south, it may be truer of the secular coasts and the north. (Newly retired after 44 seasons coaching, Florida State legend Bobby Bowden recently told young players, "The thing that has enabled me to stay in it as long as I have is I did not make football my God ... I'm not ate up with coaching football all of my life.")

So, to those secular sports fans, proselytizing to a professional golfer takes on some of the import of walking into a mosque or synagogue and suggesting conversion.

That goes double for overt religiosity on and around the field. In a Nov. 22 op-ed with the delightfully contemptuous title, "Lord, lead us not into fourth and long," St. Petersburg Times columnist Robyn Blumner accused the various college football coaches around the state of "indoctrinating" players into Christianity. "They notoriously serve up religious indoctrination with Xs and Os, as if you can't play a decent game of football without Jesus as your receiver."

Writing that football coaches are guilty of "patently illegal" coercion, Blumner dismissed the arguments of "[t]hose who are not offended by Christian proselytizing." You may be OK that "coaches use religion to build character and cohesion," and maybe "a majority of players don't mind their football mixed with Christian ritual. But that's not the point."

No, the point is that these evangelical coaches are disrespectful to Blumner's personal denomination, the Church of Tolerance:

These coaches are sending the message that the Christian faith is key to being a great athlete and an upstanding person, a notion that is not only demonstrably false, it is highly intolerant. What if the coach were a Muslim and Islam was being ingrained? I'm guessing that church-state separation guarantees would have renewed meaning.

It's those PC notions of diversity and tolerance that concern even the most thoughtful and fair critics of religion on the playing field. Although he recognized all the good evangelical Christianity has done for professional athletes and, by extension, the charities and communities it often leads them to help, USA Today's Tom Krattenmaker worried back in October that players public testimonies "leveraging sports' popularity to promote a message and doctrine that are out of sync with the diverse communities that support franchises, and with the unifying civic role that we expect of our teams."

Krattenmaker's problem was not with the presence of Christianity in the stadium, per se. It's the kind of Christianity that bothered him, "a particular version of conservative Christianity." "If their take on God and truth and life is the only right one - which their creed boldly states - everyone else is wrong."

That's been an understanding of most if not all religious denominations. There's little point in subscribing to a creed, be it Catholic, Baptist or Unitarian, that doesn't make a claim to the Truth and offer the path to salvation.

Krattenmaker's distrust of religious certitude caused him to criticize University of Florida quarterback Tim Tebow. Tebow has won a Heisman Trophy and led his Gators to two championships, all with biblical citations written in his game-day eye-black. By all accounts he walks the walk of his faith, and has been held up as an example of the best in college athletics.

But Krattenmaker found something to dislike. "Tebow does his missionary trips to the Philippines under the auspices of his father's Bob Tebow Evangelistic Association," Krattenmaker wrote. "The Tebow organization espouses a far-right theology. Its bottom line: Only those who assent to its version of Christianity will avoid eternal punishment. The ministry boldly declares, "We reject the modern ecumenical movement."

Another Tebow critic voiced the same complaint. "Tebow's religion is seen as good because it is the religion of the majority," wrote Gregg Doyel of CBSSports.com last year. "But it's not the religion of everybody. It's exclusionary, and just because you share Tebow's faith, that doesn't mean you're right."

Secularists resent being exposed to overt expressions of faith when they tune in to a sporting event - or any event. That's because they've misunderstood freedom of religion to mean freedom from religion, and they misunderstand religion itself.

Secularists often disparage religious speech or displays as "advertising."  The Washington Post's Tom Shales did it when he compared Brit Hume's Tiger Woods comments to TV pitchman "Ron Popeil on the glories of some amazing potato peeler," and then took the commercialism analogy further:

It sounded a little like one of those Verizon vs. AT&T commercials -- our brand is better than your brand -- except that Hume was comparing two of the world's great religions, not a couple of greedy communications conglomerates. Further, is it really his job to run around trying to drum up new business? He doesn't really have the authority, does he, unless one believes that every Christian by mandate must proselytize?

In an otherwise positive article in the Miami Herald on the eye-black trend Tebow started, Joseph Goodman suggested that in the NFL, Tebow might have to give up the facial verse citations. "Such displays of self-promotion are frowned upon," Goodman wrote, making the assumption, all evidence to the contrary, that Tim Tebow's scripture references are about Tim Tebow.

Others seem to suspect Tebow's motives, or at least those of his evangelist parents. In December the Orlando Sentinel published a story investigating the rise in contributions to the Bob Tebow Evangelistic Association (BTEA) since the quarterback came to prominence, and Tebow's other, unrelated charitable fundraising activities at University of Florida. The article ran more than 2,300 words and never alleged any impropriety.

Oddly, the secular left is scandalized by athletes pointing skyward or kneeling in silent prayer in the end zone, but wouldn't dream of proscribing the most outrageous, classless showboating.

On the New York Times "Freakonomics" blog last January, Stephen Dubner helpfully pointed out that the NFL should be a ripe target for atheist groups if the league didn't sort out "what sort of end-zone demonstrations will be allowed and which will not ... Why is it O.K. to praise the Lord but not, say, make a snow angel?" Maybe because making a snow angel, bumping and grinding and taunting are unsportsmanlike, and disrespectful to the other team, the fans and the game. Giving the glory to God, rather than oneself, is quite the opposite.

A common and perhaps willful misconception was clearly articulated by Blumner of the St. Petersburg Times. "As a nonbeliever, I've never understood why the Lord is thanked for his role in a victory but is not responsible for a loss," she wrote. "Wasn't God obviously for the other team? And do believers really think football outcomes are the human trivia God concerns himself with?"

This careless oversimplification is insulting to believers and is proof that many on the secular left aren't much interested in understanding faith. They prefer ignorance. They'd rather mock and slime believers, call religious testament advertising and piety moral preening. They don't bat an eye at a sex- and violence-drenched popular culture but suddenly develop delicate sensibilities at the mention of sin and redemption.