Both the ABC World News and the NBC Nightly News reported GOP Congressman Michael Grimm's federal charges of tax evasion on Monday evening, but when former Democrat congressman Jesse Jackson, Jr. was hit with campaign finance charges back in 2013, ABC ignored the story that evening and NBC failed to label him a Democrat.

On Monday's Nightly News, anchor Brian Williams reported "big trouble tonight" for Grimm, "the Republican who happens to be a former FBI agent." World News anchor Diane Sawyer stated that Grimm "was once called a rising star in the Republican party, but then he threatened a reporter on live TV and tonight battles a tough new charge." Both networks held the Democrat Jackson, Jr. to a different standard, though. 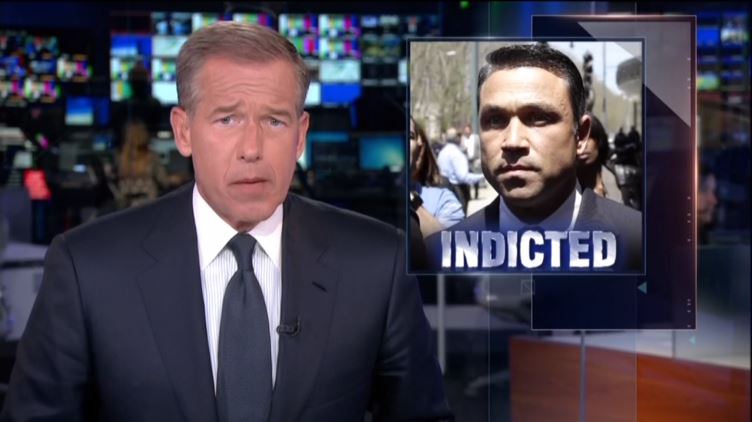 ABC, meanwhile, completely ignored Jackson, Jr.'s charges on the day he was charged. Five days later, ABC's Pierre Thomas alluded to his party when reporting that Jackson, Jr. spoke at the Democratic National Convention: "The son of an iconic civil rights leader, and one-time presidential candidate, had been a rising star, even speaking at the 2008 Democratic National Convention."

NBC did label Jackson, Jr. a Democrat five days later; ABC alluded to his party affiliation that night as well. However, the networks have employed a clear double standard in the past when reporting Republican and Democratic scandals.

"On the January 27 Nightly News, Williams reported that 'Florida Republican Congressman Trey Radel has resigned effective tonight. He pleaded guilty to misdemeanor cocaine possession.' In the very next news brief Williams announced: 'A name from New Orleans’s recent past went on trial there today. Ray Nagin, mayor of the city during Katrina, in court on bribery charges.' Williams never noted Nagin was a Democrat."

Below are transcripts of the segments:

DIANE SAWYER: And now to the U.S. congressman making headlines. Today, New York's Michael Grimm surrendered to the FBI to face charges of tax evasion. He was once called a rising star in the Republican party, but then he threatened a reporter on live TV and tonight battles a tough new charge. Here's ABC's Jeff Zeleny.

JEFF ZELENY: Michael Grimm came to Washington on the Tea Party wave of 2010, vowing to restore order to the capitol. But he's probably best known for this moment. Losing his cool when a reporter asked about a federal investigation closing in.

Rep. MICHAEL GRIMM (R-N.Y.): Let me be clear to you. You ever do that to me again, I'll throw you off this f—ing balcony.

REPORTER: Why? I just want to ask you.

ZELENY: He stormed off without carrying through on his threat. But today, he was indicted on federal fraud charges. He is accused of underreporting $1 million in profits at a restaurant he once owned. Prosecutors say he paid some employees in cash to avoid taxes.

GRIMM: This political witch hunt was designed to do a couple of things, but first and foremost, assasinate my character and remove me from office.

ZELENY: As Congressman Grimm vows to fight the charges and not resign, another congressman caught up in controversy is throwing in the towel. Congressman Vance McCallister was seen in this surveillance video, locked in a passionate kiss with a woman on his staff. Tonight, McCallister says he won't run for reelection this year.

Rep. VANCE MCCALLISTER (R-La.): My decision not to run for re-election basically is this lady right here and my family. I want to spend more time with them.

BRIAN WILLIAMS: Big trouble tonight for U.S. Congressman Michael Grimm of New York. The Republican who happens to be a former FBI agent who represents New York City's Staten Island has been indicted by the feds on mail wire and tax fraud charges related to a restaurant at which he was an investor. Among the accusations, prosecutors say he hid more than a million dollars in restaurant sales and wages. He made headlines, you may recall, back in January after he was caught on camera threatening harm to a television reporter for New York One, threatened to throw him after a balcony after the reporter tried to question him about an FBI investigation into his campaign finances. Grimm has pleaded not guilty. He claims he has been framed by the U.S. government, saying he is the victim of a political witch hunt.