Wednesday's NBC Nightly News slanted steeply toward critics of Georgia's new gun bill, allowing them four quotes as opposed to just one for supporters of the bill. The state's legislation expands the places where citizens can carry guns to include bars, schools, churches and government buildings, with certain limits.

NBC's Gabe Gutierrez opened his report quoting the law's critics: "It's official name is the 'Safe Carry Protection Act' but critics call it the 'guns everywhere bill'." At least NBC gave the real name of the bill; the ABC World News only called it what critics have named it, as anchor Diane Sawyer reported: "The governor signed a bill nicknamed the 'guns everywhere bill,' churches, bars, schools." 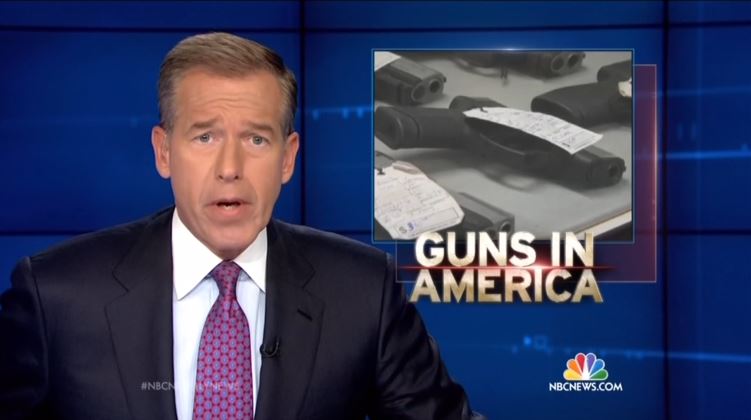 As the Atlanta Journal-Constitution reports, the bill expands the areas for citizens to tote guns:

"The bill, which takes effect July 1, also legalizes the use of silencers for hunting, clears the way for school staffers to carry guns in school zones and lets leaders of religious congregations choose whether to allow licensed gun holders inside. And it allows permitted gun owners to carry their weapons in government buildings – including parts of courthouses – where there is no security at the entrance."

NBC clearly sympathized with the bill's opponents. Its report began with a snippet of a commercial slamming the bill as "the most extreme gun bill in America." NBC quoted two other opponents of the law, a member of the Georgia Association of Chiefs of Police and a mother of a gun violence victim.

In contrast, ABC actually gave more quotes to supporters of the law – four-to-one, in fact. Still the tone was one of alarm as Steve Osunsami began his report: "Critics are calling it the 'guns everywhere law.' And depending on how you see it, it's either one of the most frightening or one of the most progressive gun laws in the country."

Below are transcripts of the segments:

BRIAN WILLIAMS: Good evening. It will soon be possible for licensed gun owners in the state of Georgia to bring a weapon into bars, schools, churches, and some government buildings, even the public areas of airports. Republican Governor Nathan Deal signed it today, and effective July 1, Georgia joins five other states that have loosened up restrictive gun laws just this year. The NRA tonight says it's a victory for Second Amendment rights, but critics say it's the most extreme gun bill in America. It's where we begin tonight with NBC's Gabe Gutierrez in Atlanta.

GABE GUTIERREZ: It's official name is the "Safe Carry Protection Act" but critics call it the "guns everywhere bill."

NARRATOR: It's the most extreme gun bill in America.

GUTIERREZ: Gun owners with permits will now be allowed to take their guns into more places, including bars, even government buildings that don't have security check points. The law also authorizes school districts to appoint staffers to carry firearms, and lets churches opt in if they want to allow weapons.

RICK JASPERSE, gun bill co-sponsor: When we limit Georgans' ability to carry a weapon to defend themselves, we're empowering the bad guys.

GUTIERREZ: Another change, airports. At Atlanta's Heartsfield-Jackson a record last year, 111 guns were found at TSA screening areas. The new law allows those with permits who set off alarms here to simply pick up their gun and leave with no criminal penalty. Some law enforcement agencies are slamming the new law.

GUTIERREZ: Other opponents like Stephanie Stone of Atlanta argue the law misinterprets the Second Amendment and promotes a gun culture.

STEPHANIE STONE: I think this bill is reckless. I think it's dangerous, and irresponsible.

GUTIERREZ: Her only son Paul, a high school freshman, was shot and killed in an armed robbery a year and a half ago.

GUTIERREZ: Since Newtown, the gun debate has escalated around the country. Eight states have enacted laws making it easier for employees to carry firearms in schools. Four states have made it easier to carry weapons in bars, and three states have eased gun restrictions in places of worship. With the Governor's signature, Georgia's sweeping legislation now takes effect July 1st. Gabe Gutierrez, NBC News, Atlanta.

DIANE SAWYER: And back here at home, big news tonight, a new challenge on the highly-charged issue on guns in America. Tonight, Georgia has opened a new front in the debate. The governor signed a bill nicknamed the "guns everywhere bill," churches, bars, schools. ABC's Steve Osunsami breaks it down.

STEVE OSUNSAMI: Critics are calling it the "guns everywhere law." And depending on how you see it, it's either one of the most frightening or one of the most progressive gun laws in the country.

UNIDENTIFIED MAN: It is long overdue. It's a tremendous victory for law-abiding citizens.

OSUNSAMI: Starting July 1st, people in Georgia can bring firearms into bars, libraries, churches and even some government buildings. People convicted of certain misdemeanors can now legally get gun permits, and police can no longer stop someone just because they suspect they're carrying an undisclosed gun.

(On camera) The law does give businesses, churches, or schools the right to say no, with a sign or a notice banning guns.

(Voice over) Georgia's governor, up for re-election, signed the law with pleasure today.

NATHAN DEAL (R), Governor of Georgia: I will put into law a gun bill that heralds self-defense, personal liberties and public safety.

OSUNSAMI: And here there are many, many supporters.

UNIDENTIFIED WOMAN: People should be able to carry it on their person wherever they go.

GUTIERREZ:: When we visited this gun range outside Atlanta, we met everyone from college kids to executives.

UNIDENTIFIED MAN: You should still have the right to be able to protect yourself.

OSUNSAMI: But across the country, gun control supporters are sounding the alarm.

DAN GROSS, Brady Campaign to Prevent Gun Violence: And to do it in the name of safety, it's tragic.

SCOTT PELLEY: Good evening. Well, no great surprise that people are divided about what happened in Georgia today. Gun control advocates are calling it the most extreme gun bill in America, but gun rights supporters say it's the most comprehensive pro-gun bill in the state's history. The law enacted today will, among other things, allow licensed gun owners to take concealed weapons to more places than ever and limit what police officers can do. Mark Strassmann is in Atlanta.

RICK JASPERSE, George House of Representatives: You know I believe I'm in the safest place in the state of Georgia right now.

JASPERSE: No one should be scared of these people. They've done nothing wrong in the past. It's appropriate that those good Georgians, if they choose to take that responsibility to defend themselves, that they are able to do that.

STRASSMAN: To qualify for a concealed weapons permit, Georgians must be 21, have no drug or weapon felony convictions, and not have been a patient in a mental facility within the past five years. The law also extends the same rights to visitors with permits from 24 states. On July 1, they'll be allowed to carry guns into bars and churches that permit them, and government buildings that do not have security screening. Schools can decide whether to allow teachers or administrators to arm themselves. Permit holders can also bring guns into parts of Atlanta's airport, the world's busiest, including shops and areas outside the security checkpoint. Kathryn Grant with Gun Sense Coalition opposes the law.

KATHRYN GRANT: This is a sad day for Georgia, not a day to celebrate a dangerous law that will now put the lives of Georgians and all who visit our state at risk.

STRASSMAN: The law also limits the police. An officer can ask someone carrying a firearm if they have a permit, but under the new law, the person will not have to show proof. Cedric Alexander is the public safety director of Atlanta's DeKalb county.

(On camera) A suspicious guy walks down the street with a bulge, looks a gun, under the new law what can your officer do?

CEDRIC ALEXANDER, public safety director, DeKalb County: Under the new law nothing. And even if it's not covered up and it's out in the open, we can no longer just walk up and say, "Do you have a license to go with that weapon?" There has to be some other extenuating circumstances that bring us to that person.

STRASSMAN: Guns are still not allowed to be carried on college campuses here. Scott, there are roughly 500,000 Georgians who have concealed weapons permits.

PELLEY: Mark Strassmann in our Atlanta newsroom. Mark, thank you.