While CNN claims to be non-partisan, anchors have been openly expressing their favor for same-sex marriage and advocating the repeal of the Defense of Marriage Act (DOMA). Host Piers Morgan and anchor Don Lemon even descended into smearing opponents of same-sex marriage as "homophobic" and akin to segregationists.

On Wednesday, Morgan tweeted, "What politicians are beginning to realise - hardly anyone under 30 is homophobic. #RIPDOMA". He added "RIP #DOMA....you will not be missed, no flowers necessary."

On his Tuesday night show, Morgan attacked opposition to same-sex marriage as "a bit offensive," and added "It's not fair. It's not tolerant. It's not American." He went after The Heritage Foundation's Ryan Anderson who argued in favor of traditional marriage.

Instead of sitting Anderson at the host table along with same-sex marriage advocate Suze Orman, Morgan put him in the audience which applauded after Morgan made his "It's not American" remark. Morgan did his best to make the emotional case against Anderson's argument:

"Do you understand why I feel, especially with Suze sitting here, an incredibly successful American business icon who's been in a 12-year relationship with a woman she loves very deeply, I find it extraordinary that you as a fellow American would be quite happy to see a prisoner's rights upheld to get married, and you'd be quite happy to have a principle which says it's about procreation even if people are 60 or 70 year-olds and can't procreate if they're women. But you don't want Suze to have the right to marry the woman she loves. I find that bizarre..."

Meanwhile, other CNN anchors and reporters either supported same-sex marriage or reported in its favor. 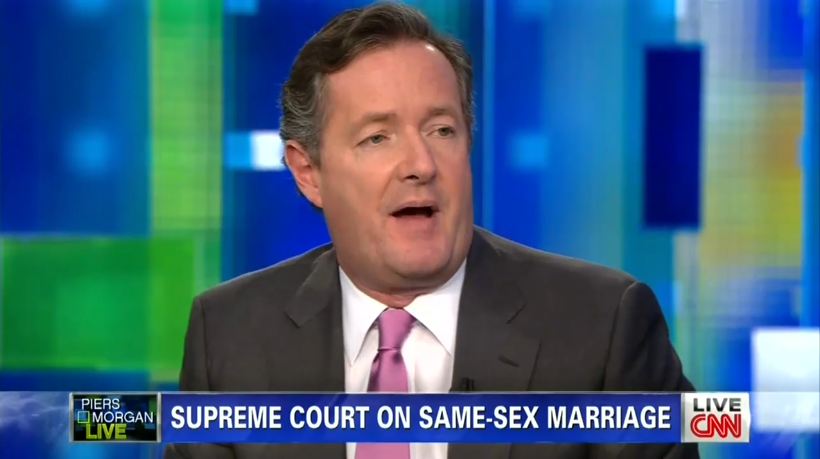 Starting Point host Soledad O'Brien voiced her support for same-sex marriage on Wednesday: "And I kind of believe that marriage is, you know, pretty much for anybody who feels like they want to enter into what can be kind of a crazy time."

Correspondent Joe Johns framed the definition of marriage as between a man and a woman as "discrimination" while reporting on the Supreme Court hearings on California's Proposition 8 and DOMA.