GOP-Bashing Authors on CNN: Press Not Hard Enough on GOP

The GOP-bashing tag team of Norm Ornstein and Thomas Mann was once again welcome on CNN on Sunday. Reliable Sources host Howard Kurtz did challenge the duo's leftist indictment of the media, but Ornstein and Mann had plenty of time to insist the press has "embarrassingly failed" to hold Republicans accountable.

When Kurtz posed "Most people think the press does lean to the left," AEI's Ornstein responded with this laugher: "And I think the mainstream media want to do everything they can to avoid any reinforcement of that."

Ornstein said the Republicans are so radical, they don't deserve equal treatment from the media as Democrats get:

"The desire to avoid bias means that you fall back on reporting it as if it's he said/she said. They're both equally culpable, except in instances where they are not. And our belief is the last few years, it has not been equal."

"The Republican Party is very much together like a Tea Party now. Their ideological commitments have moved far to the Right and they really have deep skepticism of the whole notion of facts, of evidence, of science," Thomas Mann of the Brookings Institution arrogantly sneered.

Ornstein and Mann made their liberal media tour in 2012, bashing Republicans as too radical and heaping blame on them for the country's troubles. Even though the calendar year is now 2013, CNN still treats them as respected voices.

Mann continued that the media have an obligation to treat the GOP as "an outlier":

"The Republican Party really has become an outlier and quite a radical party. And they [journalists] have to work with that reality and figure out how to manage to be fair but accurate, to deal with the reality as it exists, because if they don't say it and write it, voters are going to have no opportunity to hold such a outlier accountable."

A transcript of the segment, which aired on January 7 on Reliable Sources at 11:46 a.m. EST, is as follows: 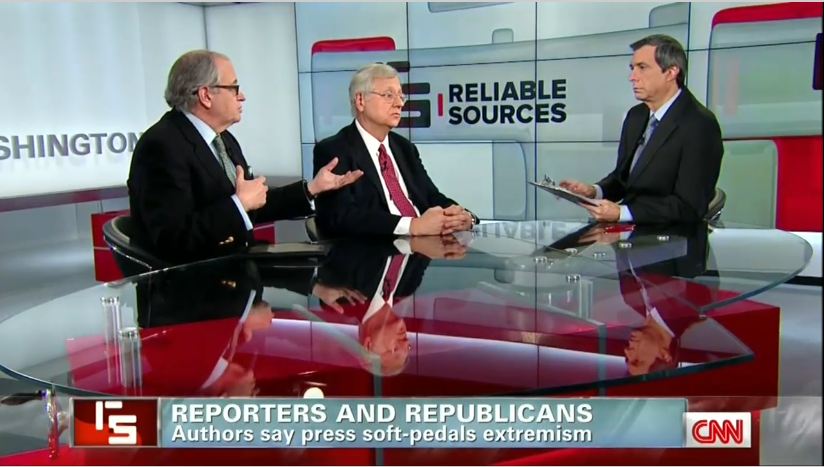 HOWARD KURTZ: It's drilled into every journalist: get both sides, make every story balanced. But what happens when the two sides are unbalanced? That's the question raised by two think tank veterans who say the press has failed to call out Republicans on their radicalism. Norm Ornstein of American Enterprise Institute and Thomas Mann of Brookings make the case in their book "It's Worse Than It Looks: How the American Constitutional System Collided with the Politics of Extremism." I spoke to them earlier here in the studio.

KURTZ: You believe -- start with you, Norm -- that the media have utterly failed in the last couple of years to hold Republicans accountable. True or false?

ORNSTEIN: True. And I think, you know, I wouldn't say utterly failed.

ORNSTEIN: Overwhelmingly failed. Embarrassingly failed. You know, there is, as you said at the outset, a norm in journalism. And I think it's been reinforced by the outside groups from Accuracy in Media to FAIR. They're ready to pounce any time there's any sense of bias. The desire to avoid bias means that you fall back on reporting it as if it's he said/she said. They're both equally culpable, except in instances where they are not. And our belief is the last few years, it has not been equal.

KURTZ: But, Tom, hasn't the press pretty consistently pointed out the influence of the Tea Party in the Republican Party, the way in which the GOP has moved to the Right, particularly during the presidential primaries. I've read 1,000 stories about that.

MANN: There have been a number of stories on that particular point, but it really hasn't captured the broader phenomenon that's been at work for well over a decade. The Republican Party is very much together like a Tea Party now. Their ideological commitments have moved far to the Right and they really have deep skepticism of the whole notion of facts, of evidence, of science. And they're willing to engage in behavior that a generation ago we would have said is just beyond the pale, that is take the country's public credit and risk a default to get their way.

KURTZ: So, if what you say is right, what are those organizations afraid of?

ORNSTEIN: I think there's a deep fear, first, of being attached to a liberal bias. You know they're worth –

KURTZ: Most people think the press does lean to the left.

ORNSTEIN: Exactly. And I think the mainstream media want to do everything they can to avoid any reinforcement of that. And I actually think now, you know, there is a fall back on a refuge on television more than anything else that is, you know, if we're like the law and we present advocates from one side and advocates from the other, then everything is fine. So, if you represent 99.5 percent of scientists on climate change with one person and a half a percent with the other side, you're fine with that. And I think also, frankly, advertisers now are unhappy if there is any sense of bias, as well. And the old Chinese wall between advertisers and publishers on the one hand and editors and reporters on the other is not quite a firm wall anymore.

KURTZ: Well, this is a striking message coming from the two of you, because you've both been around Washington a long time. And you do have a reputation as being kind of centrist, even though you're at different kinds of think tanks. But at the same time, I just have to wonder, maybe you just don't like where the Republican Party has gone. I mean, after all, the people who represent the Republicans here in D.C. were elected by constituents who want them to do what they're doing. And so this is more of an ideological message on your part as opposed to calling out the press for supposed bias.

MANN: It could be, but I don't believe it is. We don't do that kind of analysis and –

MANN: But look to see how we back it up. I mean, we really look at arguments made and there's no truth content to them. It's just stunning what Republicans have said and been willing to do that's simply aren't true, not in a little fact-checking way, but in broad arguments about what America's about, where we've come from, why we have deficit problems now, what government spending does to jobs, and the like.

ORNSTEIN: Howie, I would just add that it's not so much about ideology as it is about tactics as well. So, for example, we have seen in the last four years filibusters used in ways that they've never been used throughout history. But you can scarcely find a story looking at legislation that failed in the Senate with a majority of votes that didn't just say, "Legislation fails in Senate."

KURTZ: Was the same true –

ORNSTEIN: You don't call them to account for tactics –

KURTZ: Was the same true during the big budget battle last year, when, some would say, the Republicans were much more intransigent in terms of practically pushing the country into default? The stories tended to say, "Squabbling politicians," you know, "they just can't get along"?

MANN: Well, that's exactly right. And even our most distinguished inside chronicler of politics and policymaking, Bob Woodward, sort of fell into that very trap.

KURTZ: In his book?

ORNSTEIN: But it's not just the book. I mean, it really was the reporting all along. And we actually start our book with the story of the debt limit. This is the first time ever it was used as a hostage-taking mechanism, and the reports rarely reflected that. And, you know, part of our concern is – again, it's not ideological. But if voters don't have a sense of who's to blame, in a system -- you know, it's not a parliamentary system. If you have a party acting as a parliamentary minority, you're going to have to find ways to hold them accountable and it's up to the press to report the truth, not the balance.

KURTZ: So finally, do you believe that most journalists are committed to some kind of false equivalence –one side says this, one side says that? And do you see any prospect of that changing?

MANN: I don't think they're committed to it. Most of them have strong professional norms that are admirable. They want to get the story right and be fair. But we live in an era now when it isn't balanced. The Republican Party really has become an outlier and quite a radical party. And they have to work with that reality and figure out how to manage to be fair but accurate, to deal with the reality as it exists, because if they don't say it and write it, voters are going to have no opportunity to hold such a outlier accountable.

KURTZ: I'm sure many Republicans would disagree with what you're saying, but appreciate your critique of the press here.