CNN anchors have been turning to advocacy. Don Lemon didn't show a hint of journalistic integrity on Sunday's Newsroom as he ripped into conservative guest Will Cain and lectured him on the offensiveness of Mitt Romney's "gift" remarks, joining liberal journalist LZ Granderson in the leftist ambush.

"This is an astounding interview," Cain remarked, realizing he was outnumbered by two liberals. "I'm a little taken aback by the chorus of surprise. I really am. From both of you guys." Cain lashed out on Twitter after the ambush.

After Romney said the Obama campaign did well handing out gifts to its base and turning them out to vote, Lemon called that "drinking the haterade" and "the height of insulting." And after Cain said Romney's analysis wasn't inaccurate, both Lemon and Granderson were flabbergasted.

"I just cannot believe you said what he [Romney] said was accurate," Lemon snapped at Cain. "What he said was the height of insulting. It was so insulting and so condescending." Lemon even cast Cain as a denier of facts.

"And it makes sense to -- it's just like the numbers and the polls all made sense if you're doing some fuzzy math. It doesn't make sense, Will. I'm sorry. Thank you," Lemon lectured him.

When Cain attacked President Obama for pandering to his base, Lemon defended President Obama's strategy of "tailoring their message for one group or another" and noted that "Governing means governing all of the people."

"No, that's an amazing contradiction you just said within two sentences of yourself, Don," Cain shot back. "If you're governing for everyone, then why would you craft policies that only apply to some people?" He didn't get much of a chance to say more than that.

"This is eye-opening. For everyone," an astounded Cain said at the end.

A transcript of the segment, which aired on November 18 on CNN Newsroom at 6:24 p.m. EST, is as follows: 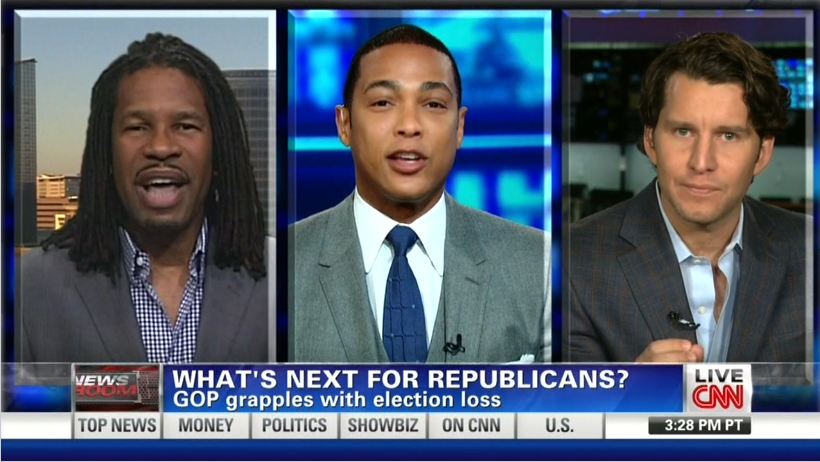 WILL CAIN: I've said this this week, Don. When you look at Mitt Romney's comments, first of all, I think you can easily say it's not very sportsmanlike. You just lost and now you're saying all the reasons that you lost when really it's just –

DON LEMON: We call it hatin' – drinking the haterade. That's what it is.

CAIN: Right, right. However, though, I say this as well, that what Mitt Romney had to say was also not inaccurate. It wasn't politically advantageous, but the Democratic Party has been crafting policies –

LZ GRANDERSON: Did you just say it wasn't inaccurate, Will?

LEMON: It wasn't inaccurate? What are you talking about?

GRANDERSON: Did you just say it wasn't inaccurate?

CAIN: First of all, I think you guys' two reactions is outstanding. I mean, it's just amazing. Yes, I was saying that --

GRANDERSON: I think your lack of reaction is amazing.

CAIN: All right. I'm a little taken aback by the chorus of surprise. I really am. From both of you guys. Yes, his statement is accurate. The Democratic Party has been crafting policies that are tailor-made for various constituencies, whether or not that is, breaks you up by gender, age, ethnicity. Absolutely those policies have been crafted to win over votes and appeal to every demographic. Now here's –

CAIN: Great. That's an awesome political analysis. But I'm talking about governance here and what's a better way to govern. If you want to win elections, it's absolutely wonderful to pander to every single group you can hope to get votes from.

GRANDERSON: You know what, Will?

LEMON: I think – but the thing is, Will, is that governing –

CAIN: This is an astounding interview.

LEMON: Hold on, let me finish, Will. Let me finish. Governing means governing all of the people, no matter what demographic it is, whether it'd be black, white, women, straight, gay, Republican.

CAIN: Excuse me, wouldn't that mean --

CAIN: No, that's an amazing contradiction you just said within two sentences of yourself, Don. If you're governing for everyone, then why would you craft policies that only apply to some people?

LEMON: I didn't – someone was talking in my ear. I didn't hear the end of that. Hold on, Will. Say the end of your sentence again.

CAIN: If you're governing for everyone, why would you craft policies that only apply to some people?

LEMON: I don't think that's what I – that's not what you said. You said what he said was correct.

GRANDERSON: Will, here's the situation.

CAIN: You're right. I did say that. I think you need to rationalize these two things. I'm not inconsistent here.

GRANDERSON: – President Obama is not handing out gifts, all right? He's being a President. Now, the only thing I found really consistent with this is that Romney has been essentially hating on half the country for almost two years. I didn't necessarily find his comments out of line with everything else he has talked about. We've been characterizing them as gaffes. I've been trying to say this is who he really is. He really believes half the country is a bunch of moochers.

Now, I think what's really interesting is that, if you strip away all the areas, the urban areas that's predominantly minority, right? He still lost a whole bunch of white people, too. The man is refusing to take personal responsibility, which is the height of irony when you think about what he went around and talked about with 47 percent of the people not being personally responsible for their own lives.

LEMON: Listen, we've got to go.

CAIN: I know you do. There's so many things to respond to here --

LEMON: Will, I love you Will. I just cannot believe you said what he said was accurate.

GRANDERSON: I can, because he's cut from the same cloth, man.

LEMON: What he said was the height of insulting. It was so insulting and so condescending.

CAIN: Let me make a suggestion.

LEMON: And to say – hold on. And to say that – it's just insulting to a whole bunch of people. I can't believe that you would even think that way.

CAIN: Okay. So let me make a suggestion, since you guys happen to know me and it kind of -- since you know me and you happen to know the kind of statements I make, let me explain them. I know you've got to run on to the next thing, but I can assure you, that what I said is highly logical and makes sense.

LEMON: It makes – it's highly logical and makes sense to you.

LEMON: And it makes sense to -- it's just like the numbers and the polls all made sense if you're doing some fuzzy math. It doesn't make sense, Will. I'm sorry. Thank you.

CAIN: Oh now you're lumping me in with people that didn't believe the polls.

LEMON: It does not make sense. And it's insulting. Tough love. Thank you, guys.

CAIN: This is eye-opening. For everyone.