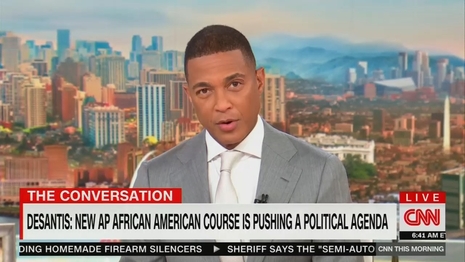 CNN has never been "Facts First." Don Lemon hosted a segment on today's CNN This Morning to discuss Ron DeSantis's decision to uphold the Florida State Department of Education's decision to deny the College Board the opportunity to run a pilot AP (Advanced Placement) course on African American Studies pushing themes like "Intersectionality and Activism."

At one point, CNN's Audie Cornish said "I don't know where he wants to draw the line. Slavery was political at one point."

"So, slavery became illegal. Now it's going to be illegal to teach slavery in schools. It seems really odd."

Wrong! Don Lemon surely knows that DeSantis is not proposing to ban the teaching of slavery. DeSantis does object, however, to African American history being taught from a hard-left perspective. And examining the curriculum in question, that is exactly what is being proposed. Students wouldn't be taught: they'd be indoctrinated in CRT, BLM, and history according to avowed Communist Party die-hards like Angela Davis.

Cornish repeatedly wondered where the educational line can be drawn, and questioned whether politicians should get involved in deciding what will be taught in schools.

Well, somebody is going to decide! In recent decades, it has been hard-left teachers' unions and their members who have been setting the educational agenda. The school board activism movement that Cornish mentioned sprang up because parents eventually became aware of and outraged by the leftist indoctrination to which their kids were being subjected.

Cornish actually let the cat out of the bag, saying, "what our kids learn really helps shape us as a society. So control over that is very high stakes." Darn right! Just like conservative parents don't want their kids subjected to the AP curriculum, liberal parents presumably wouldn't want their children to be educated in accordance with a conservative mirror image thereof.

With the Left insisting on their right to indoctrinate, it sounds like vouchers are the answer. Let parents have the right, and the ability, to have their children educated in accordance with their values.

On CNN, Don Lemon dishonestly suggesting that Ron DeSantis is proposing to make the study of slavery illegal in Florida was sponsored in part by Pfizer, maker of Robitussin, Sleep Number, Chevron, United Healthcare, Subway, and Peleton.

DON LEMON: So, live pictures you're looking at now of Miami, Florida, as the governor of that state, Ron DeSantis, defends his decision to block a new advanced placement course on African American studies in his state. He says some of the lessons in the course go too far and are a violation of state law.

RON DESANTIS: We want education, not indoctrination. This course on black history, what are, what's one of the lessons about? Queer theory. Now, who would say that an important part of black history is queer theory? That is somebody pushing an agenda on our kids. And so, when you look to see they have stuff about intersectionality, abolishing prisons, that's a political agenda. And so, we're on, that's the wrong side of the line for Florida standards.

LEMON: The objections from the DeSantis administration center around the writings in the coursework associated with a number of topics, including black queer studies, as you heard there, heard from him in that sound bite right there. The movement for black lives, and reparations as well. Now, Florida under DeSantis banned instruction at schools that suggest anyone is privileged or oppressed based on their race or skin color. College Board is currently plotting -- piloting, I should say, excuse me, the AP course at 60 schools across the country and plans to make it available nationwide.

Let's discuss now. CNN anchor and correspondent and host of the CNN podcast "The Assignment with Audie Cornish." Audie Cornish is here. Good morning to you.

CORNISH: Well, already I'm seeing some activists call this, "Don't say black." The idea that he's  going to -- like the "Don't say gay" bill. That you can somehow draw lines in the classroom.

And I think that's one of the most important things he said. The idea it's on our side, our standards, our side of the line. What is that line? Who's going to draw it?

And if Ron DeSantis runs for president, does he plan on drawing those lines nationwide? In classrooms nationwide? And I think that is a question for every voter, every person who's kind of watching what's going on in Florida. What does it mean when politicians think you can reach all the way into the classroom and tell people what is and what is not okay.

And I don't know where he wants to draw the line. Slavery was political at one point. Martin Luther King obviously, as Republicans love to talk about, you know, every January. This was a political movement. And no one wanted to learn about that then either. If that's the kind of lineage he wants to join, you know, people who are saying, don't talk about the political thinking of marginalized groups, he's welcome to do it.

LEMON: So, slavery became illegal. Now, it's going to be illegal to teach slavery in schools. It seems really odd.

CORNISH: I mean, where's he going to draw the line? Somewhere between abolition and now? I don't know where Ron DeSantis considers the history versus the now.

All of these things, that's going to be part of our history. And so, are you going to ban that because it's not happy, because you don't like it, because it makes the MAGA movement look bad? Do you understand what I'm saying?

CORNISH: When I was studying, kind of the school board activism movement of which DeSantis is very much the face of, these are the exact conversations that happen decade after decade. Which is that people of the moment say we shouldn't be talking about x because it's too political. Get it out of the classroom. And then a big fight ensues. Because, what our kids learn really helps shape us as a society. So control over that is very high stakes. More high stakes than people give it credit for.