Wait: I thought it was those ee-vil conservatives who use violent imagery in political talk!

Ali said that although Trump isn't the same candidate he was in 2016 or 2020, "MAGA just isn't into" Ron DeSantis, and so, in terms of DeSantis beating Trump:

For those not up on their Roman history, Brutus murdered Caesar, stabbing him to death.

It's very early in the 2024 cycle. DeSantis hasn't even thrown his hat into the ring. Still, what makes Ali think that Republicans aren't "into" DeSantis? This poll shows him leading Trump among Republicans by a whopping 23 points.

On Ali Velshi's MSNBC show, guest Wajahat Ali of the Daily Beast saying he won't believe that Ron DeSantis will beat Donald Trump until "Brutus actually takes out Julius Caesar," was sponsored in part by Tide, Abbott, maker of Freestyle Libre, and Booking.com. 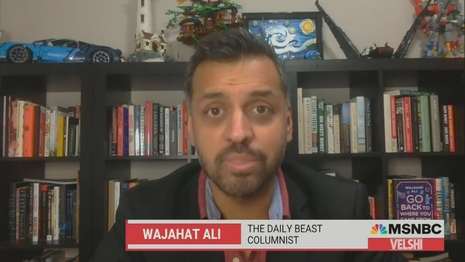 MEHDI ASAN: Well, let's talk about 2023. On the one hand, as you say, [Trump] is certainly not going to be in prison even if he is indicted—that trial will take a fair amount of time, whether he ever goes to prison is an open question.

Politically, is he a weaker man? Is he a more damaged political brand? Is he facing challenges from a Ron DeSantis, or any other Republican who fancies their chances against him in a primary? Given he's clearly, he's clearly not the candidate that he was in 2016, or even 2020.

If you look at the latest polls, guess who's the king of MAGA? Guess who they overwhelmingly still support as the leader, and the presidential candidate for the Republican party in 2024?. Donald Trump.

But, right now, it's still Trump, Mehdi. After everything that we just talked about, and the fact that he dined with Nick Fuentes, a white supremacist, and the fact that he said, you know what?, let's terminate the Constitution. We still seeing MAGA, that's another one, you just casually forget he said we should terminate the Constitution, and Republicans were like, eh, nobody's perfect.