CNN's Cupp: GOP Leaders Should Have Told Trump—Herschel Is 'CRAP'

S.E. Cupp, a "CNN Republican," apparently thinks it's cool to use a vulgar term to describe Herschel Walker.

On today's CNN This Morning, in a post-mortem panel on Walker's campaign, Cupp said that Republicans might have had a better result in Georgia:

"If you had a strong Republican leadership willing to say to Donald Trump, this candidate is crap and we're not going to win with this candidate."

Can you imagine Cupp, or any CNNer, ever disparaging a Democrat in such a scatological manner?

CNN host Poppy Harlow began by quoting The New York Times, that Walker was "the white power structure's mistaken idea of a candidate that would appeal to them, talking about black men."

Don Lemon tried to castigate the GOP in broader terms, repeatedly claiming that the selection of Walker reflected what the Republican establishment thinks of black people and voters, that they would for him because he's black. But his opponent was also black. 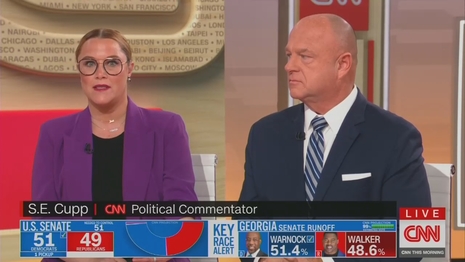 David Urban, a former Trump adviser, pushed back. He said there are no smoke-filled rooms choosing candidates, and that Walker was not the pick of the GOP establishment, but of one man: Donald Trump.

In fact, although Trump did push Walker's candidacy, it was not even the former president who chose Walker--it was the Republicans of Georgia, who gave him a resounding 68% of the GOP primary vote.

Lemon stubbornly clung to his notion that the Republican establishment hand-picked Walker. That was Lemon's way of suggesting that Republicans are condescending to black candidates and voters, falsely assuming that black voters will support any black candidate, regardless of qualifications.

In fact, if there is a group that truly disparages black Republicans, it is the liberal media, particularly fellow African-Americans. In 2020, we caught Tiffany Cross saying:

"I watched the Republican convention, and seeing the slew of black speakers that they had, it really did look like a modern-day minstrel show to me."

And earlier this year, the bombastic Elie Mystal, appearing on Cross's [since-canceled] MSNBC show, said that black Republicans like Walker are "tokens" who are "shucking and jiving for their white handlers."

Lemon ended the segment by kicking Walker now that he is down. Said Lemon: "werewolves and vampires. That's where we are." That was a reference to Walker having said on the campaign trail that he'd rather be a werewolf than a vampire, after watching a movie in which a werewolf was able to kill a vampire.

Such a class act, that Lemon.

On CNN This Morning, political commentator S.E. Cupp saying that the GOP could have had a stronger candidate in the Georgia senate race if Republican leaders had told Donald Trump that Herschel Walker was "crap" was sponsored by Zales, Subway, GoDaddy, Volvo, and GlaxoSmithKline, maker or Voltaren.

POPPY HARLOW: I thought this was so interesting from the New York Times this morning, talking about all of Walker's scandals and everything they knew about him before putting him forward for this seat. He said, it appeared to have a profound impact on his standing, especially with black men, some of whom saw Mr. Walker as the white power structure's mistaken idea of a candidate that would appeal to them, talking about black men.

ERROL LOUIS: Mistaken is a nice word. Look, it was an interesting political --

HARLOW: Remember what Lindsey Graham said a few weeks ago --

LOUIS: It was an interesting political science experiment. Because, like, look, to just be perfectly honest about it, Herschel Walker wasn't qualified in any way --

LOUIS: -- for the duties of being a United States senator.

LEMON: Okay, I've got to ask this question. And I know -- does it speak to what the Republican leadership or establishment think of black people? Because they think they can put someone like Herschel Walker in there, and they think that black folks are going to go out and vote for him just because he's black.

DAVID URBAN: No, no. So, I saw this pastor on social media giving kind of a sermon in his church. Don't forget, this isn't a monolith. The party, there's no, like, giant smoke-filled room where the party got together and said, chomped on cigars and said, Herschel's our guy --

LEMON: This is Trump, saying --

URBAN: One guy! One guy said this is our guy, right? So it isn't some giant decision by the elders in the party that Herschel Walker is the candidate to win --

LEMON: But then you have him flanked by the elders in the party.

URBAN: Flanked. Well, Trump has them flanked, right? There's nowhere to turn for those folks.

S.E. CUPP: But this is why leadership is so important. Because if you had a strong Republican leadership, that was willing to say to Donald Trump --

CUPP: -- this candidate is crap, and we're not going to win with this candidate, then you might have had some different outcomes.

LEMON: She's making the point -- she's answering the question that I asked you. That is what the Republican establishment thinks of black people.

LOUIS: That's what they think of ethnic voting, right. They are some who look at it and say, well, black candidates seem to really draw out a lot of black voters,so let's get a black candidate.

LEMON: I agree with you. It's black people now. If it was a Latino it would be the same thing. You understand what I'm saying?

URBAN: I get it. I'd push back on that. I don't think that there's -- this is one person's candidate, right? Donald Trump. Mitch McConnell said, hey look, candidate quality matters, Herschel walker is not a great candidate. We should do better, right? I think a lot of people, to Errol's point, if they had looked across the state of Georgia they'd have picked, you could have gone out and recruited a whoe lot of different folks that would have done a lot better than Herschel. You could have picked a woman. An African-American. There could have been a lot of candidates who would really stand out.

URBAN: I'm just saying, more qualified, right? If that's what you're looking for, you could have picked somebody, right?

LEMON: Werewolves and vampires. That's where we are.