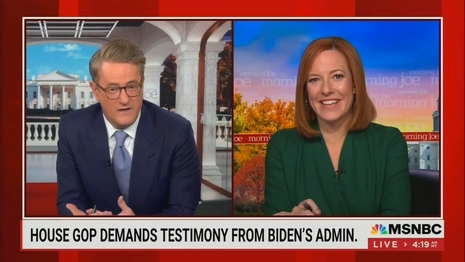 Just when you thought Joe Scarborough had gone as far as possible in repudiating his conservative past, he finds a way to take it up another notch! Witness today's Morning Joe.

Once again, Scarborough went on a long spiel about how back in 1995, he and his fellow soldiers of the Gingrich revolution made a big mistake by investigating Bill Clinton. "Members of Congress got beaten badly in '96. Did worse in '98."

Scarborough suggested that today's Republicans are making a similar mistake in investigating what he repeatedly called "Hunter Biden's laptop."

That was a blatant mischaracterization. As Rep. James Comer, the chairman of the House oversight committee that will be conducting the investigation has made clear, this is an investigation of Joe Biden. The question is whether Biden was indeed "the big guy" who was skimming a share of the ill-gotten proceeds that Hunter obtained through his influence-peddling schemes.

Scarborough told Republicans "they're going to waste two years and lose big in '24."

It's through that lens that we therefore have to ask: why is the liberal media so intent on trying to dissuade the Republicans from investigating Hunter Biden's dealings and the possible connections to Joe Biden? One thing is certain: it's not out of MSM concern that by investigating, the Republicans will be hurting themselves politically! We all know that old adage about not stopping an enemy when he's in the process of destroying himself!

Last week, we caught Don Lemon, on his new morning gig at CNN, suggesting that, when it comes to Hunter Biden, there's no "there, there." And furthermore, that "The American people are dealing with a lot of things. I'm not sure this is one of them."

It was Lemon doing his best Leslie Nielsen impersonation: "move on: nothing to see here!"

Can Scarborough possibly believe that Americans don't have a right to know whether the sitting President of the United States might have profited in this illicit way, including in deals with China, which is arguably the US's most determined and dangerous rival?

Of course not! Scarborough and the rest of the MSM want to undermine, and hopefully derail, the investigation for the very reason that they know, or certainly suspect, that there is plenty of "there, there." He can't possibly say out loud "the walls are closing in" on the Bidens, so he just orders the Republicans to stop with those walls.

At one point, Scarborough made a slip that revealed just how closely he identifies with the Democrats. He said:

"People are going, oh, they [the Democrats] are afraid they're going to investigate Hunter Biden. No, I'M NOT."

Scarborough and the Democrats: same struggle!

Note: as for Scarborough's claim that Republicans are exclusively focused on "Hunter Biden's laptop," to the exclusion of addressing issues of concern like crime, inflation, and the border. Comer made the point that Republicans can walk and chew gum at the same time, and that the great majority of House Republicans are not on the Oversight committee and will be addressing those other issues.

On Morning Joe, Joe Scarborough trying to dissuade Republicans from investigating Hunter Biden's dealings and the possible ties to Joe Biden was sponsored in part by GlaxoSmithKline, maker of Theraflu, Johnson & Johnson, maker of Listerine, and Liberty Mutual.

JOE SCARBOROUGH: Willie, yesterday I was reading, we have David Frum who is going to be on today. I was reading, he was talking about how -- and I can put myself in this collection of people -- how we were so out of touch after getting elected in 1994. We got elected. We had this great majority. Just a landslide, and we went in there, and we got in a bubble.

We had a Contract with America. Despite what Democrats said, about 75% of Americans supported things in there, and then the investigations started. And they started against Bill Clinton, and they continued and they continued. And David said that people -- and he was right. Basically, Americans go, we know the guy's got some problems. And we know he also has some problems when it comes to ethics inside the government. We don't care. Just, you know, do your job.

We talked about how we were in a bubble. Members of Congress got beaten badly in '96. Did worse in '98. Bill Clinton is impeached and he leaves with, what, 62, 63% approval rating, right?

WILLIE GEIST: Former speech writer for George W. Bush and conservative columnist Marc Thiessen tweeted, "So voters just stopped the GOP red wave because they thought Republicans were too extreme. But as soon as they win a razor thin majority, the first thing Rs announce they're doing is . . . investigating Hunter Biden -- not addressing inflation, or crime or the border. Absolutely nuts," writes Marc Thiessen.

And by the way, this Hunter Biden laptop stuff, they [the American people] are already tuned out on that. They're already tuned out on this crazy -- they can do it. Like, people are going, oh, they [the Democrats] are afraid they're going to investigate Hunter Biden. No, I'm not. If you're a Republican you should be afraid that they're going to waste two years and lose big in '24.