It was another Sudden Respect classic on today's Morning Joe.

But now that Shapiro has asserted that a focus on Donald Trump is hurting Republican electoral chances, suddenly Morning Joe no longer sees the founder of The Daily Wire as someone to be suppressed. To the contrary, Scarborough finds Shapiro's thoughts "fascinating." Morning Joe boosted Shapiro, with Scarborough reading at length from his tweets [here and here], and calling him "very prominent."

John Heilemann echoed Scarborough, saying Republicans need to "wake up and realize that Donald Trump is political poison." Heilemann also claimed that the midterms have "fallen apart" for Republicans, and that:

"The notion of the red wave over the course of these last few months, that is no longer present in anyone's mind." To honest Republicans, insisted Heilemann, the notion of major GOP gains in the House or Senate is "gone. That dream is gone."

And while Morning Joe focused on Ben Shapiro, Scarborough also alluded to, without quoting, Brit Hume's take, which was along lines similar to Shapiro's. Hume yesterday tweeted [emphasis added]:

"Republicans need to understand that while Trump motivates a significant segment of the GOP base, he motivates ALL of the Democrats' base, and a large portion of independents who might otherwise vote GOP." 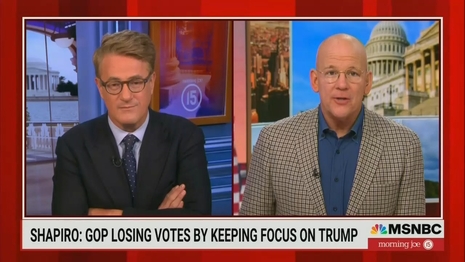 The landscape is littered with prognostications about midterm elections that have come a cropper. In 2014, Chuck Todd proclaimed on MSNBC:

“If November comes and goes and Democrats hold the Senate and break even in the House, I think we’re going to look back at the month of July as the month Republicans lost their shot at the Senate.”

Instead, Republicans gained nine Senate seats, and added 13 more in the House to get to 247, their largest majority since 1928.

Heilemann's claim that the "dream" of a Republican red wave being "gone" is duly noted. See you in November, John.

Morning Joe boosting Ben Shapiro's tweets asserting that Republicans are hurting themselves electorally by following Trump, and John Heilemann claiming that the "dream" of a "red wave" is "gone" was sponsored in part by Subway and Hulu.

JOE SCARBOROUGH: Some prominent voices on the right are starting to sound the alarm about exactly what Donald Trump is doing to the Republican party.

In a series of tweets, I found it fascinating, Ben Shapiro, of course, very prominent conservative commentator on the right, warns that the more Republicans talk about Trump, the worse they're going to do electorally. Ben writes in part this, quote, if Republicans want Americans want to vote against Biden, they have to campaign against him. Not against the FBI or the deep state or whether Trump had the right to have boxes of classified documents in his closet.

And at the end he goes, a mystery wrapped in an enigma which, of course, neither Ben Shapiro nor, yesterday, Brit Hume are suggesting it's much of a mystery at all. If Republicans want to win, they have to, like, cut the umbilical cord between them and Donald Trump.

JOHN HEILEMANN: The day has come. You've said this for a period of time. When will Republicans wake up and realize that Donald Trump is political poison?! I think it's starting to happen, you know? And I think it took all of this, the thing you and I have been talking about for the last couple months which is, you know, all that historical -- the historical headwinds for the in-power party, plus inflation, plus all the things that were teeing up this year to be a good year for Republicans, and then seeing it all kind of fall apart.

Now, we don't know what the outcome's going to be. But whether or not, however Republicans ultimately do in November, it has fallen apart in their hands.

The notion of the red wave over the course of these last few months, that is no longer present in anyone's mind. There are no honest Republicans right now who think that they are going to win 40, 50 seats in the House, or win four to six seats in the Senate. That's gone. That dream is gone.

SCARBOROUGH: You look at what Donald Trump did in Georgia in December of 2020. It looks like he purposefully lost that race for Republicans. He's doing the same thing now in 2022. And the question is, again, what Republican out there, what conservative out there is thinking, yeah, this is the guy I want to follow over the cliff for another election?