Irony Lost On MSNBC's Cross When It Comes To Provoking Violence

The irony was lost on Cross. In the opening minutes of her MSNBC show on Saturday, Tiffany Cross heaped personal insults on Donald Trump. She called him: "the Mangled Mussolini" [whatever that's supposed to mean], "the Velveeta Voldemort," and "a wounded animal, cornered."

A bit later in the segment, Cross brought in Naureen Chowdhury Fink to discuss the risks of political polarization and incitement to violence. Although she predictably singled out right-wing extremism, her remarks were, in fact, of general applicability.

"I think one of the main things that has really been a concern coming out of all this is the sort of narratives and the incitement to violence that's been coming out. And as we've seen around the world, you know, several times, one of the first steps to violence that we see is kind of dehumanizing or otherizing a group of people. We need to be able to absorb different kinds of opinions . . . we need to be able to have respectful, pluralist debate."

Right on, Naureen! And nothing says "dehumanizing" like literally describing your political opponent as an "animal!"

And when it comes to "respectful debate," it's hard to top comparing an opponent to a leader of the genocidal WWII Axis powers, or to Voldemort, whom Harry Potter author J.K. Rowling described as "the most evil wizard for hundreds and hundreds of years."

Naturally, Cross and Chowdhury Fink focused exclusively on the threat of violence from the right. It didn't occur to them that Chowdhury Fink's warnings as to what could provoke violence also applied to the left. 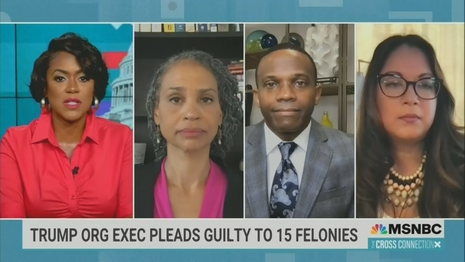 Imagine an impressionable member of Cross's audience hearing that Donald Trump is the equivalent of a fascist dictator responsible for the death of millions and the "most evil wizard for hundreds and hundreds of years." What should you do to such an evil, genocidal, person? Indeed, he's not even a person, he's an "animal!"

Tiffany, when it comes to provoking violence, may your ears hear the words of your guest!

Note: Ever eager to demonstrate her hipness, Cross—who makes a point of dropping pop-culture phrases—opened the show by saying that "45 [i.e., Trump] has 99 problems," a reference to a Jay-Z song.

On her MSNBC show, Tiffany Cross, after insulting Donald Trump in a variety of ways, including calling him an "animal," is oblivious to the warning of a guest that "dehumanizing or otherizing" people could provoke violence was sponsored in part by Colonial Penn, Abbott, and DirecTV.

TIFFANY CROSS: Good morning, everyone. Welcome to the Cross Connection, I'm Tiffany Cross. Well, 45 has 99 problems, and the truth is definitely one.

Mangled Mussolini claims that he had a, quote, standing order to declassify documents that were removed from the Oval Office and taken to the residence. But, 18 former top Trump aides, including two former chiefs of staff, tells CNN that that is complete fiction, quote, ridiculous and plain old BS.

Now, that's not great news for the Velveeta Voldemort.

Maya, I want to start with you, because Trump has caught multiple civil and criminal cases. And I just wonder, do you think he will ever be held accountable, and what exactly does accountability look like for a former president in this position?

MAYA WILEY: When you think about how the net is tightening in all these various cases, it becomes very difficult to see a possibility in which one or more of them does not finally close the deal.

CROSS: Which essentially makes him a wounded animal, cornered. So we'll see how he continues to act out.

What should we be doing as a country to prepare? Particularly, what should law enforcement agencies be doing to prepare for the domestic, the number one domestic threat to this country, which is white supremacy? Which a lot of these people belong to groups perpetuating such things.

NAUREEN CHOWDHURY FINK: Thanks, Tiffany. I think one of the main things that has really been a concern coming out of all this is the sort of narratives and the incitement to violence that's been coming out. And as we've seen around the world, you know, several times, one of the first steps to violence that we see is kind of dehumanizing or otherizing a group of people, right? And that has been really part of the narrative of political polarization in this country.

I think law enforcement is certainly one aspect of the answer. but politicians really have a responsibility here to set a narrative to bring us back to what was so, what is so great about this country, is that it is a pluralist democracy. And we need to be able to absorb different kinds of opinions.

So I think there's a responsibility on politicians to remind all of us, citizens and communities, that we need to be able to have respectful, pluralist debate.