MSNBC Anti-Trump Melodrama: 'Vote As If Your Life Depends On It—Will We Survive?' 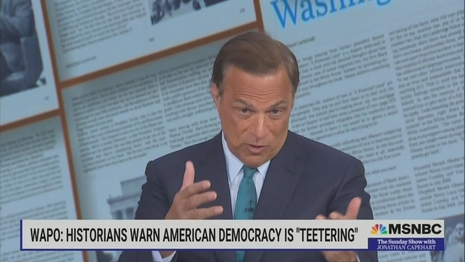 It was anti-Trump melodrama to the max on Jonathan Capehart's MSNBC show on Sunday.

Michael Beschloss, the liberal historian turned Twitter troll, looked directly into the camera [see screencap] and beseeched the viewers: "Vote as if your life depends on it. Because it might."

Then, a panicky Capehart asked Beschloss: "are we going to survive this?"

But before poor Jonathan could do something rash, Beschloss added that he doubted there'd be an actual civil war in a military sense, and noted that America overcame the fascist threat of the 1930s.

Beschloss, who was recently in a gaggle of liberal historians invited to the White House to adviser Biden before the raid, made two incendiary claims:

-- He said that Kevin McCarthy threatened Merrick Garland, telling him that unless he laid off Trump, "there would be violence." There somehow a violent threat in this? “When Republicans take back the House we will conduct immediate oversight of this department, follow the facts, and leave no stone unturned. Attorney General Garland, preserve your documents and clear your calendar.”

-- And he claimed there were reports that Trump tried to send a message to Garland, saying that unless he were granted some form of immunity, there would be "civil war."

And Trump did ask a federal appeals court to rule that he is entitled to absolute presidential immunity from civil lawsuits regarding his efforts to remain in office after the 2020 election. But again, that is altogether different from threatening Garland with civil war unless he were granted immunity.

Can Beschloss cite chapter and verse to back up his inflammatory accusations? If not, rather than McCarthy or Trump, it's Beschloss who could be rightly accused of potentially inciting violence by stirring up irrational fears among the very audience he begged to vote "as if your life depends on it."

Anti-Trump melodrama to the max on Jonathan Capehart's Sunday MSNBC show was sponsored in part by Verizon, CVS, Volvo, Subway, and Safelite.

MICHAEL BESCHLOSS: You know, it's always said, this was the most important election in our history. Well, it's pretty close to it.

And I would say to our friends, who are watching us today: vote as if your life depends on it. Because it might.

JONATHAN CAPEHART: You know, the meeting that you had with the president happened before the search at Mar-a-Lago.

CAPEHART: Again, unprecedented, to have the home of anyone who has held the title of President of the United States. First time ever. After this wild week, what would you tell the president now?

BESCHLOSS: I think what I would say is, you have to pursue the law, and you have to let your attorney general do his thing. And that's advice, obviously, he did not need.

You know, the thing I hated most about this week, Jonathan, was not just the fact that Donald Trump had done things that no ex-president has done. You know: national security documents, nuclear documents, reportedly, by your newspaper [the Washington Post], that could put our children in danger if they get to be public, or if they are given to some foreign government, or get to a terrorist. Presidents are supposed to protect, not do that.

What, you know, what is even worse than that? Kevin McCarthy, threatened—the possible next Speaker of the House if the Republicans win—threatened an attorney general, and said, you better lay off, essentially, you better lay off Trump, or else there's going to be violence. When have we ever seen that before in American history?

And even reports that Trump himself tried to send a message to Merrick Garland, that unless you get some kind of immunity, you going to have a civil war. That's a threat. No one should make it. An ex-president of all people.

CAPEHART: And so, finally then, given everything that you just said. And your last answer is truly the most frightening thing that I've heard, or that we can even contemplate. Are we going to survive this?

But what I would say is, look at, remember those two moments I mentioned: 1860 we went through a civil war. God help us, I don't think that's going to happen in terms of the sense of military on the field.

And we certainly got through the fascist wave of the 1930s. So, the hopeful part of this is that America does have resilience, and we do get over moments like this. Let's pray together that we do.

CAPEHART: From your lips to God's ears. Michael Beschloss, thank you very much for coming back to the Sunday Show.

BESCHLOSS: Loved it always: thank you.