Does Tiffany Cross Think 17 Million 'Hungry' Children Would Be Better Off Aborted?

Of all the arguments made in favor of abortion, the most heartless and grotesque are those suggesting that unborn children would be better off dead than having to deal with difficulties in life.

Yet on her MSNBC show on Saturday morning, Tiffany Cross trotted out a [false and misleading] statistic with the implication that some or all of the supposedly 17-million "hungry" children in America would have been better off aborted.

"A person's ability in choice to bring life in this world is their choice. But in America, where guns are the leading cause of death for children, an AR-15 has more rights than a woman does. And now, the Supreme Court wants to mandate birth in a country where 17 million children are hungry, and more than 420,000 children are in the foster-care system."

Let's first consider Cross's absurd argument that AR-15s have more rights than women. Inanimate objects have no rights. Rather, the Second Amendment recognizes the right of people to keep and bear arms.

Let's focus on Cross's mention of those 17 million children who are supposedly "hungry." Does she mean to suggest that many if not all of them would be better off never being born? Given a voice, how many of those 17 million do you think would prefer to live, even if life came with some challenges?

And then there is Cross's fraudulent claim that 17 million children in America "are hungry." That implies that at any given moment, there are that many hungry children.

Surely Cross must know that is false. "Hunger insecurity" has been conflated by activists with actual hunger. It means only that at one point during the year, a family had concerns about meeting dietary needs. It doesn't mean that anyone actually ever experienced hunger, let alone that all are experiencing hunger on a daily basis.

In fact, for children in low-income homes, obesity is a much more prevalent problem than hunger. According to the Journal of the American Medical Association, “seven times as many (low-income) children are obese as are underweight.” 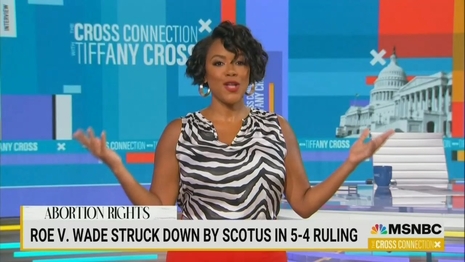 Cross made another false and misleading statement. She claimed that the Supreme Court "wants to mandate birth."

No. The Court's decision in no way requires women to give birth. It simply recognized the incontrovertible fact that the Constitution did not create a right to abortion, and thus that the individual states are free to legislate on the matter.

Cross seemed to imply that the Court's ruling would "mandate birth" by striking down state laws permitting abortion. That is entirely untrue. If indeed, as Cross claimed, a majority of Americans opposed the overturning of Roe, it could well be because many got false and misleading information about it from people like Cross.

And finally, Cross again resorted to her shopworn slur on Justice Amy Coney Barrett. Cross opened the show by welcoming viewers to "Gilead," and smeared the brilliant and accomplished Barrett as a "Handmaiden."

On her MSNBC show, Tiffany Cross citing the supposed presence of 17 million hungry children in America as a reason to preserve the right to abortion was sponsored in part by Wayfair, Subway, Walgreens, and Facebook.

TIFFANY CROSS: Well, good morning everybody, and welcome to Gilead. Oh, I mean The Cross Connection, and I'm Tiffany Cross.

Today, for the first time in 49 years, American women are waking up with less rights than we had yesterday. That's because the Supreme Court struck down Roe v. Wade. Now, people across the country have taken to the streets protesting this move. The majority of Americans did not want the Court to overturn Roe v. Wade. A majority of Americans. But four men, who will never bear children, and one Handmaiden, decided for an entire country that their Christian doctrine is the only way.

Let me reiterate this. A woman's right to choose is a human right. A person's ability and choice to bring life in this world is their choice. But in America, where guns are the leading cause of death for children, an AR-15 has more rights than a woman does.

And now, the Supreme Court wants to mandate birth in a country where 17 million children are hungry, and more than 420,000 children are in the foster-care system.