Ex-Republican On CNN: Most Republicans Want Their Political Opponents 'Destroyed or Killed' 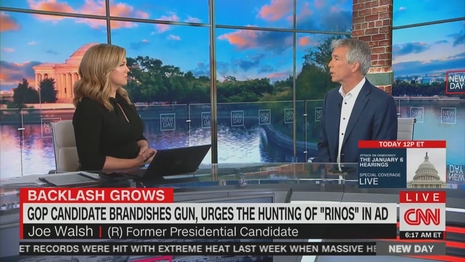 Joe Walsh is a washed-up Illinois politician and a chameleon. He's gone from being a liberal Republican to a hardcore Tea Partier and ardent Trump supporter, to becoming so fiercely anti-Trump that in addition to voting for Joe Biden in 2020, Walsh even announced, as our Tim Graham has noted, that he would vote for a "socialist" over Trump.

Walsh lasted just one term in Congress. And his 2020 "campaign" for the GOP presidential nomination didn't even last half as long as Kamala Harris' fleeting, failed effort on the Dem side.

So why does CNN regularly invite this loudmouth non-entity onto its air? Because he can be counted on to trash Republicans. On this morning's New Day, co-host Brianna Keilar interviewed Walsh regarding a controversial TV ad from Eric Greitens, who is seeking the Republican nomination for US senator from Missouri.

The ad depicts an armed Greitens saying that he's going "RINO hunting," and calling on voters to "join the MAGA crew. Get a RINO hunting permit. There's no bagging limit, no tagging limit, and it doesn't expire until we save our country."

It's an appalling take after several years of political violence. But Walsh exploited Greitens' misdeed to smear Republicans as a whole. Asked by Keilar whether the ad would hurt Greitens with Republican primary voters, Walsh insisted that it wouldn't, and to the contrary, would actually help him. Why? Because:

"Most Republican voters  . . . want their political opponents destroyed or killed."

Keilar egged Walsh on, lamenting that the GOP has changed since 2012, when it made then Republican Missouri senatorial candidate Todd Akin persona non grata for his abortion gaffe that women couldn't get pregnant in a "legitimate rape."  And Keilar teed Walsh up to claim that the "radicalized" GOP puts politicians and public officials "at risk." Walsh concluded "we've got to stop being outraged by what my former political party does. This is who they are. We need to accept it and defeat it."

Note: as you'll see in the chyron, presumably to give him some credibility, CNN disingenuously still touts Walsh as an "(R)" and a "Former Presidential Candidate." Walsh quit the Republican party more than two years ago. And someone who dropped out after getting about 300 votes in the caucuses in his neighboring state of Iowa, and whose campaign lasted about as long as the half-life of a gnat, can rightly be called a PCINO: Presidential Candidate In Name Only!

It's a video that shows Greitens in a group of armed men in tactical gear bursting into a house, with Greitens saying, "The RINO feeds on corruption and is marked by the stripes of cowardice. Get a RINO hunting permit. There's no bagging limit, no tagging limit. And it doesn't expire until we save our country."

RINO is an acronym, Republican In Name Only. The video has been removed by Facebook for violating its violence policies; it's been flagged by Twitter for abusive behavior.

And joining to us discuss this is former Republican congressman from Illinois Joe Walsh. The big question is, will this even hurt him? Or will this help him?

JOE WALSH: This will help him. Brianna, like that helped that Republican candidate up in Michigan who was arrested by the FBI for participating in January 6th. Look, America needs to wrap her arms around the fact that the base, the voting base, of one of our two major political parties, Brianna, is fully radicalized.

We talk about that, and we get outraged about it. But I don't think people know what that means. That means most Republican voters no longer believe in truth. They've given up on democracy. They want a strongman to rule. And, they want their political opponents destroyed or killed. This ain't fringe anymore in the Republican party.

WALSH A lifetime ago. Brianna, I was in Congress ten years ago. I said some pretty crazy things now and then. I'd be boring right now.

Todd Akin was ostracized from the party. When Republicans back then said or did things beyond the pale, they were shunned. Now they're embraced. And the reason is, Brianna, is because this is where their voting base is! Again, it's radicalized, one of our two major political parties. I guarantee you, in Missouri's primary, Greitens will be rewarded for this.

WALSH: Heck, yes. I mean, think about it. He's telling us that he wants to kill human beings. He wants to kill his political opponents. Again, this should outrage all of us. But, Brianna, it's at the point now, we've got to stop being outraged by what my former political party does. This is who they are. We need to accept it and defeat it.