Morning Joe: It's 'Paranoid' To Say Gov. Coming For Guns, But Praises Beto Who Said Just That!

Can Joe Scarborough and the Morning Joe crew really be this clueless? On Thursday's show, Scarborough and Willie Geist repeatedly claimed that it was "paranoid" for people to think that the government could be coming for their guns. But there's just one problem: in that same segment, Scarborough praised Beto O'Rourke, who said just that, for the political stunt he pulled yesterday, in which he interrupted Texas Gov. Greg Abbott during his press conference on the Uvalde school shooting.

Beto O'Rourke, Joe. Surely you remember that in a Democratic presidential debate in 2019 during his failed, short-lived run, O'Rourke said:

As you'll see in the linked clip, that line drew huge cheers from the Democrat crowd in attendance.

Yes, O'Rourke subsequently backed away from that statement when it became politically untenable. But does anyone doubt that if he and his fellow Democrats could, they would take guns away from law-abiding Americans?

Responding to a person on the stage with Abbott who called O'Rourke a "sick son of a bitch" for his stunt, Scarborough claimed that the real sick sons of bitches were Abbott and others who won't pass more gun-control legislation. For good measure, Scarborough twice called Abbott and those with him "freaks." 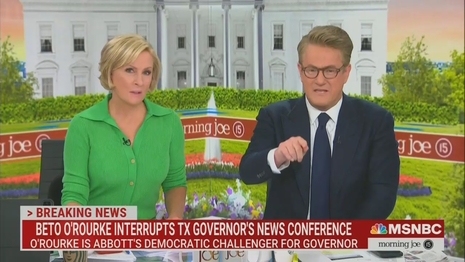 So, is Joe Scarborough suffering from short-term memory loss? Or was he consciously covering up that Beto O'Rourke, the object of his praise, had boasted that "hell yes," he would be taking guns away from lawful owners? Remind us again, Joe: who's the SOB and the freak?

On Morning Joe, Joe Scarborough saying it was "paranoid" for people to think the government would want to take their guns away, while in the same breath praising Beto O'Rourke, who has said, "Hell yes! We will take your AR-15, we will take yourAK-47," was sponsored in part by GlaxoSmithKline, maker of Nucala and CarFax.

JOE SCARBOROUGH: It's a paranoid minority. And Willie, it's all very calculated by gun lobbyists who represent gun manufacturers. They have been whipping a paranoid minority into a fury for a long time. And I'm not sure why senators don't step forward when 90% of Americans want universal background checks. I don't really get that.

WILLIE GEIST: Andi t's happening again right now. I mean, the hours after the attack, there were certain outlets that are saying, buy your guns. They're coming for your guns. Have they noticed no one's ever come for their guns? Every time they're told it's coming: the big seizure.

Now to that moment we mentioned a bit ago. At the news conference in Uvalde, where Texas Governor Greg Abbott was interrupted by his Democratic challenger in the race for governor, Beto O'Rourke. The former congressman was in the audience at the strt of the event. But as Governor Abbott wrapped up his opening remarks, O'Rourke walked to the foot of the stage and began to address the governor.

BETO O'ROURKE: The time to sop next shooting is right now and you're doing nothing. You're all bringing up nothing.

PERSON ON STAGE: No. He needs to get his ass out of here. This isn't the place to talk this over.

O'ROURKE: This is totally predictable when you choose not to do anything.

SCARBOROUGH: Mika, you know, guy's on stage calling him a sick son of a bitch for actually bringing up guns?

MIKA BRZEZINSKI: The one thing that was not brought up in the press conference.

The sick son of a bitches were the ones up on that stage that keep--the freaks! The freaks on that stage that keep passing gun legislation that allows 18-year-olds to go get weapons of war and gun down little children. Everything that Beto said, everything that he said to those reporters, is supported by the overwhelming majority of Americans. And that's what's really sick here.