Earlier this month, the story broke about Black Lives Matter spending $6 million on a 6,500 square-foot house in Los Angeles, complete with six bedrooms and bathrooms, a pool, several fireplaces, a soundstage, and a bungalow.

Not a good look for an organization theoretically dedicated to fighting racism and protecting the poorest and most vulnerable among black Americans.

On her MSNBC show Saturday morning, Tiffany Cross tried to defend BLM, pushing back against the story. Predictably, Cross, and a guest she recruited, blamed the story on . . . "the right."

Just one problem. The story appeared in the liberal New York magazine. And was written by Sean Kevin Campbell, an investigative reporter at the magazine who happens to be black—and not a black conservative.

Campbell is someone who in an earlier article on BLM's "murky finances" had praised grassroots activists willing to risk their lives, in contrast with organizations like BLM who rake in tens of millions of dollar through their corporate connections. Campbell has tweeted that the article on BLM's murky finances "was one of the hardest I'd done.' And that writing the article on the $6 million home was, "heartbreaking.  As organizers have fallen homeless, I uncovered a $6 million property purchased with BLMGNF funds."

Cross clearly thinks that Black Lives Matter cannot be scrutinized while black bodies are harmed. It's a nasty diversion to ask where the millions they've accepted are going. 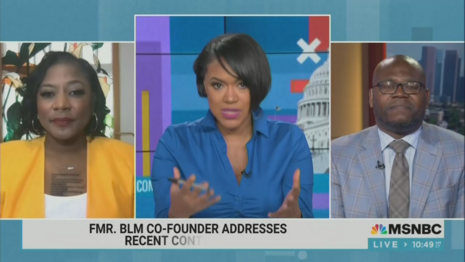 Cross also slammed two journalists who apologized on behalf of BLM. A furious Cross wondered: "who asked you? How are you in a position to apologize on anything?"

Another little problem. The two reporters are from another notoriously liberal outlet: NPR. Oh, and they're also black.

"Some of the harshest criticism of BLMGNF has come from within. Internal emails dating to 2016 show activists voicing concern about how donations were being spent and how the organization was being run, and frustrations only continued to mount."

So much for this supposed campaign on the "right" to expose BLM's purchase. Cross also challenged the headline of Campbell's article which described the purchase as "secret," and Cross railed against what she called "shoddy journalism."

But as Campbell laid out [emphasis added]:

"A man named Dyane Pascall purchased the seven-bedroom house that would become known as Campus . . . Within a week, Pascall transferred ownership of the house to an LLC established in Delaware by the law firm Perkins Coie. The maneuver ensured that the ultimate identity of the property’s new owner was not disclosed to the public."

To help make her case, Cross brought on a guest Alicia Garza, a founder of BLM—although she and Cross repeatedly emphasized that she is no longer associated with the organization. Garza claimed that the "right" is trying to "discredit" and "delegitimize" BLM. Sounds like BLM is doing a very good job of that, all on its own.

Question: Why has Cross chosen to side with the corporate-connected BLM, and defend its questionable-at-best spending practices, rather than standing up for the grassroots activists being hurt by BLM's apparent profligacy?

On her MSNBC show, Tiffany Cross and her guest falsely claiming that the "right" was using "shoddy journalism" to discredit BLM regarding its purchase of a $6 million home in Los Angeles was sponsored in part Intel, Dell, UPS, and AT&T.

TIFFANY CROSS: This story, that Black Lives Matter organization spent $6 million in donations on what they call a creator's house, and of course, the right has taken that and run with it. As we see black bodies continue to be harmed. They'd rather talk about that.

There are messages that are being put forward every single day by the right that are really trying to delegitimize, right, some of the victories that we've won to really represent America in a different way.

CROSS: Right. And I want to say, I see our lower-third saying it was a secret house. I'm not sure how secret it was. I think in organizations sometimes, people, you know—depends on who you have running them—don't always know how to properly file paperwork . . . One of my challenges around this story was just shoddy journalism, the way the story was written. You're a journalist you've done, you know, reporting like this, I wonder how much research went into this, quite frankly?

If you're so quick to hop off the bandwagon at this point, I wonder: were you ever really down with Black Lives Matter in the first place? Were you looking for an excuse to escape? I have to say, there were two NPR reporters, Alicia and I talked about this a little bit, who apologized because: we just have to apologize about the Black Lives Matter movement as the story came out. They happened to be two black reporters.

Now, Alicia and I were wondering: you're apologizing on behalf of whom, and to who, and who asked you? How are you in a position to apologize on anything?

So, this story should not overshadow the fact that black bodies continue to be harmed, and fall.