In the liberal media's Biden-Sycophant Sweepstakes, it would be hard to top CNN's John Harwood. In addition to calling him a shameless "sycophant," we recently described Harwood as a Biden "lackey, lickspittle, and toady."

But MSNBC's Jeremy Bash has staked his own claim to the dubious distinction of being the MSM's biggest Biden suck-up. Like his political donations, his orations show he's a staunch Democrat.

Bash went from being chief of staff for Leon Panetta in the Obama-Biden CIA and Defense Department to being an MSNBC "security analyst." On today's Morning Joe, Bash bestowed a slightly-belated Valentine's bouquet on Biden for his handling of the potential Russian invasion of Ukraine.

Willie Geist asked Bash whether he thought Putin is bluffing, or actually intends to invade. Bash gave a brief response before launching into the bouquet for Biden. 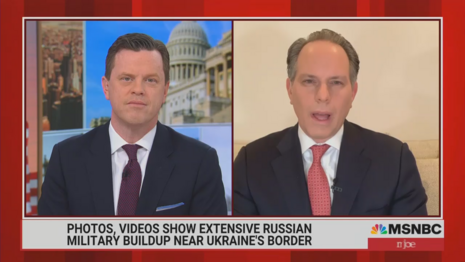 Given his tarnished track record, Bash should think twice before lavishing praise on Biden for his handling of the latest foreign crisis.

After all, Bash is the same guy who, back in April 2021, said that Biden's decision to signal to the Taliban that all US troops would be withdrawn from Afghanistan by September 11th was "clearly the right decision."

How'd that work out, Jeremy?

Note: Geist might have thought he was complimenting Bash in describing him as "incredibly plugged in." But what Willie was inadvertently admitting is that, under the guise of being an MSNBC "analyst," Bash is nothing more than a White House surrogate funneling pro-Biden propaganda.

WILLIE GEIST: The West continues, behind President Biden, to threaten sanctions, there are troops moving into eastern Europe. So, obviously, the United States and the West is taking this very seriously.

You're extraordinarily plugged in. What is your sense of where Putin is right now, and whether this may be a bluff or whether he may actually go across that border?

But I have to give the Biden administration a lot of the credit, as we've been discussing. Because you know, there's a military adage that the most decisive phase in war is phase zero. That's what we're in right now. We're in the phase right before the shooting starts. It's an information warfare campaign.

And I think the Biden administration has done a phenomenal job of declassifying information, calling Putin's bluff, saying that any predicate he might concoct to invade is actually just fabricated. And in that way they've maintained alliance unity, they've deterred Putin, allowed us to close our embassy, move 5,000 troops to Poland, prepared sanctions, and sent a clear signal that if Putin invades, the West is going to be ready.

So I think the Biden administration has handled this phase, phase zero, absolutely perfectly.