Joe Biden and Pope Francis: fellow victims of slanderous attacks by conservatives. In "solidarity," because they've both been "maligned" by neo-conservative "factions."

That was the view of CNN religious commentator Father Edward Beck on this morning's New Day, commenting on Biden's visit to the Vatican. Consider Beck's word choice: "maligned"—meaning defamed, slandered or libeled.  Beck thus negated the possibility that there could be any validity to the criticism of the two men leveled by those conservative "factions."

We'll leave critiques of Pope Francis to the theologians. But when it comes to Biden, Beck would apparently grant him what might be called a secular dispensation for his failures on everything from Afghanistan, to the border, to inflation. Any criticism of Biden on those matters is nothing less than libel.

Beck was on a panel hosted live at the Vatican by Chris Cuomo. And the CNN anchor made a claim about Biden that was so palpably, provably, false, that you wonder what made Cuomo think he could get away with it.

Cuomo said that whereas Trump changed positions on moral issues "to help himself," in contrast, "that has never been what Biden is or was."

Biden has never changed his position on a moral issue "to help himself?" Does Cuomo's memory not go back to 2019, when to "help himself" in securing the Democrat nomination, Biden infamously flip-flopped on the Hyde Amendment, which forbids federal funding of abortions?

And in that same constituent letter, Biden described himself as having "strong convictions against abortion." Those "convictions" also went by the wayside in subsequent years, with Biden now supporting abortion virtually without restriction.

Cuomo prefaced his invidious comparison of Trump and Biden by boasting that, unlike others, "I don't" take at face value politicians' claims of being religiously devout. 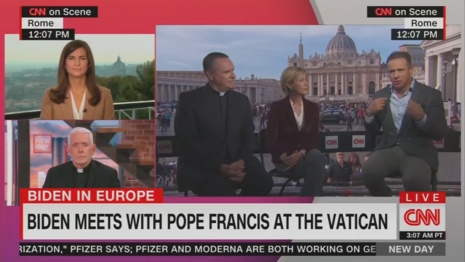 Tough, courageous, guy, that Cuomo! But as our Tim Graham has noted, not tough or courageous enough to mention that just yesterday, his brother, ex-New York Governor Andrew Cuomo, had been charged with a sex crime.

A CNN religion commentator describing Pope Francis and Joe Biden as having been "maligned" by conservative "factions," and Chris Cuomo claiming, contrary to clear evidence, that Biden has never changed position on a moral issue out of political expediency, was sponsored in part by Servpro, Amazon, GoDaddy, and ADT.

CHRIS CUOMO: Let me go to Father Edward Beck. You and I were here Now here in Rome together when then, Bergolio, became Pope Francis. Both men were unlikely choices for leadership. But now here they are. How can they help each other in this meeting, Father Beck?

FATHER EDWARD BECK: Well, it's interesting,  I think they're both facing similar obstacles, Chris. There is this neo-conservatism faction in the Roman Catholic church, and we're seeing that politically here as well in the country. And in a sense I see them as allies in that.

Pope Francis has been critiqued by right-wing media, religious media here in this country. He's come back at them for that critique. We've seen a great division with the recent election in the county of those who are saying the election is not even legitimate. Some are saying the same thing about the papacy of Francis. They called for his resignation.

So in some ways they can bond on the fact that they've been both maligned by similar factions. And I think that gives them a certain solidarity

CUOMO: You know, Father Beck, often religion is a no-go zone in politics. If somebody says they are devout, that's it: we leave it at that. I don't. Trump was using it as a masquerade. He changed positions on what he thought was moral or immoral to help himself. That has never been what Biden is or was.