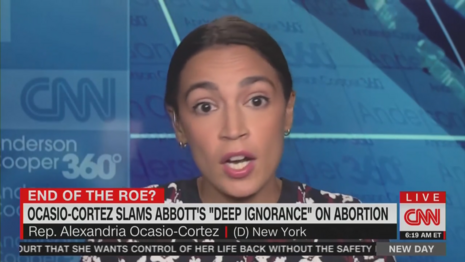 The left continues to twist itself into absurd linguistic knots as it strives to display its solidarity with the transgender lobby...and the media is always on board.

Last week, we caught journalist Irin Carmon, the liberal co-author of Notorious RBG, speaking of "a woman--or a pregnant person" having a right to an abortion. Because it would horribly insensitive to suggest that only women can be pregnant!

In a clip aired on CNN's New Day Wednesday morning, Alexandria Ocasio-Cortez similarly abused the English language in absurd fashion. In the context of blasting TX Gov. Abbott over the state's abortion law, Ocasio-Cortez spoke of a "menstruating person" and "any person with a menstrual cycle." Again, perish the thought that someone would imagine that Ocasio-Cortez thinks only women can menstruate!

The irony is that Ocasio-Cortez claimed to be explaining "Biology 101" to Abbott.  Biology 101 tip for Ocasio-Cortez: only women can menstruate. Spare us the PC talk!

And in a truly vile slander, Ocasio-Cortez, in ripping Abbott's pledge to take rapists off the streets, accused Abbott and Texas legislators of themselves being a part of the "rape culture." You'll notice CNN doesn't interrupt any of this spleen-venting.

The segment also featured S.E. Cupp claiming to be pro-life yet defending Roe v. Wade, saying it's "settled law." Yes, Roe's been on the books since 1973. But even an MSNBC legal analyst has opined that Roe "stands on a weak foundational basis," and that the right to privacy [upon which Roe was based] does not exist either in the history or the text of the Constitution." Cupp tried to claim she "very much dislikes abortion," but can't abide any limits on it. 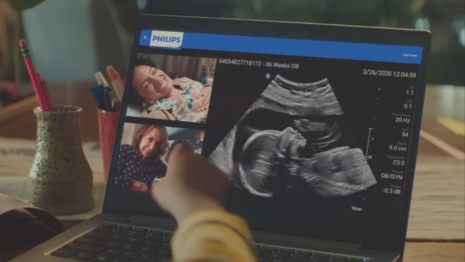 Ironically, CNN touting Ocasio-Cortez's pro-abortion views was sponsored in part Amazon, whose ad [see screencap] featured a mother showing her sonogram to her son, and asking him if he could see "the baby." It was also sponsored by T-Mobile, Sandals, Procter & Gamble, maker of Crest, and Sleep Number.

REPORTER: Why force a rape of incest victim to carry a pregnancy to term.

GREG ABBOTT: It doesn’t require that at all, because obviously it provides at least six weeks for a person to be able to get an abortion.

ALEXANDRIA OCASIO-CORTEZ: Well, I find Governor Abbott’s comments disgusting. And I think there’s twofold. One, I don’t know if he is familiar with a menstruating person’s body. In fact, I do know that he’s not familiar with a woman — with a female, or menstruating person’s body, because if he did, he would know that you don’t have six weeks. It's that, quote unquote six weeks, and I’m sorry we have to break it down on — break down Biology 101 on national television, but in case no one has informed him before in our life — in his life, six weeks pregnant means two weeks late for your period. And two weeks late on your period for any person, any person with a menstrual cycle, can happen if you’re stressed, if you’re diet changes, or for really no reason at all. So you don’t have six weeks.

This idea that we’re going to, quote unquote, end rape, when the same type of, frankly, rape culture, and the same type of misogynistic culture, that informs this abortion law to begin with is also, you know, those beliefs are held by the governor himself and this Texas state legislature

S.E. CUPP: So, this is a law really no one asked for. I say that as a pro-life person who very much dislikes abortion.

JOHN BERMAN: When we’re talking about the biology of it, when Alexandria Ocasio-Cortez was speaking, you said it appeals to more than half the base here. Roughly half of America gets their period.

CUPP: And I just think it sets such a dangerous precedent to undermine settled law . . . Again, I don’t like abortion but I accept Roe v. Wade is settled law. And this completely undermines it.