Democrats have been claiming that GOP voting bills are the biggest threat to democracy since the Civil War. But in the meantime, the Dems are staging a civil war of their own, and the target is, increasingly  . . .  Joe Biden!

On Tiffany Cross's MSNBC show this morning, a cadre of black liberals tore into Biden, calling him "failing, delusional, and hypocritical" in regard to his efforts to pass federal voting-rights laws and undo the filibuster. Cross even mocked Biden's speech on voting rights, saying it could be translated as: 'please let the black and brown people vote. Please. C'mon, guys.'

At the end, Cross inevitably accused fellow Dems, seemingly including Joe Manchin and even Biden, of racism. She said, "Black folks are disproportionately impacted by these policies, so I wonder if that's why there's some hesitancy to address how serious and dire the situation is." 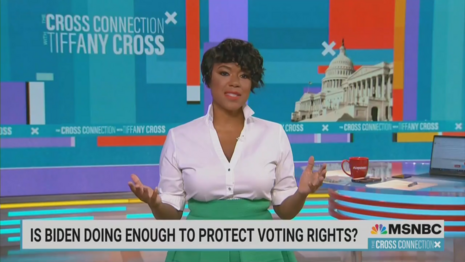 Biden does have a history of making offensive remarks on race, as his description of Obama back in 2007 as being "the first mainstream African-American who is articulate and bright and clean." But in this case, Cross's insinuation makes no sense. Blacks voters represent the most reliable component of the Democrat coalition. Biden and Dems at large have every reason to want to facilitate their ability to get to the polls.

Black liberals attacking Biden as "failing" in his efforts to end the filibuster and combat Republican voting bills was sponsored in part by Dell, Liberty Mutual, Carfax,  American Express, and DirecTV.

CHARLAMAGNE THA GOD: I'm glad President Biden said something. But he's still not going hard enough. He's still being delusional about how to stop this problem. Why does he think that the same people who are clearly for voter suppression would ever vote for the For the People Act or the John Lewis voting rights act?

TIFFANY CROSS: Good morning, we have a lot to cover on The Cross Connection, but we begin, with as you just saw, Charlemagne Tha God, who spoke for so many when he essentially said, talk is cheap, Mr. President.

Biden gave a speech on Tuesday that can effectively be translated as: please let the black and brown people vote. Please. C'mon, guys.

All week, the Dems on the run have been meeting with lawmakers in Washington, D.C., including filibuster fanboy Senator Joe Manchin. They also met with Vice-president Kamala Harris. But without any kind of concrete action on the federal level, what good are these cute little meet-and-greets?

CLIFF ALBRIGHT: You can't give a speech saying that voter suppression is the worst since the Civil War, and it's an existential crisis, and then punctuate that speech by basically saying, but I'm not going to do anything to the filibuster. That's inconsistent. It's hypocritical.

We need the president to lean in. We need him to have an LBJ moment. Right now, he's failing. He's having what I call a Rutherford B. Hayes moment, who is the president who ended Reconstruction by pulling the troops out, and basically saying black folks, you're on your own.

That's what it feels like right now from the president that in spite of a passionate speech that he gave last week, we've got to see it backed up with him leaning in to modifying and carving out a filibuster. There aren't ten Republicans, in spite of what Joe Manchin says. He keeps saying that they're there, but he never can show them to us because they don't exist.

CROSS: Right. We don't believe you. You need more people.

And look: black folks are disproportionately impacted by these policies, so I wonder if that's why there's some hesitancy to address how serious and dire the situation is.