Yesterday, we called out Morning Joe for mentioning George Floyd six times but failing to breathe a word about the Chauvin trial juror who wore a BLM hat, and a T-shirt emblazoned "Get Your Knee of Our Necks" to a protest rally in Washington DC that Al Sharpton's organization had billed as the 'Commitment March: Get Your Knee Off Our Necks,' and at which several members of the Floyd family spoke. Before being selected as a juror, that person, Brandon Mitchell, denied to the judge having attended a demonstration about police brutality.

Morning Joe continued its unconscionable blackout of the matter on today's show.

But CNN this morning staged a surprisingly fair-and-balanced debate on the subject. With New Day co-host John Berman moderating, two CNN legal analysts battled it out over the merits of the motion that Chauvin's lawyer has filed seeking a new trial, and including among its grounds "jury misconduct."

The two lawyers first argued over other grounds, including pre-trial publicity, the failure of the court to move the trial to another county, and the huge $27 million settlement paid by the city of Minneapolis to the Floyd family during jury selection.

But Berman then made it a point to turn the discussion to Mitchell's wearing of the hat and T-shirt, and whether he was "honest" about his attendance at the DC demonstration when queried about it by the trial judge. It's also notable that during most of the segment, the photo was displayed of Mitchell wearing the hat and T-shirt in question. 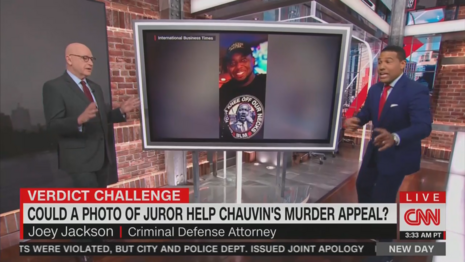 Lawyer Paul Callan argued that Mitchell's shirt saying "Get Your Knee Off Our Necks" was "an exact reference to the fact pattern in the Floyd case," and that the t-shirt and cap "certainly looks like participation in a demonstration against police brutality."

Lawyer Joey Jackson admitted that the T-shirt and demonstration attendance raised an argument for the defense. But he made two absurd assertions in arguing against the defense motion:

So kudos to CNN for staging a vigorous debate. And more boos for Morning Joe for its continued blackout of a major story.

CNN hosting a surprisingly fair-and-balanced debate about the misconduct of a Derek Chauvin trial juror was sponsored in part by E*Trade and Skechers.

Now, this is routine, this is expected, this is what defense lawyers do. And it does not specifically refer to something that has generated some controversy of late. It’s a photo that surfaced online showing one of the jurors wearing a Black Lives Matter hat and shirt that says "Get Your Knee Off Our Necks."

That juror, Brandon Mitchell, also participated in last year’s March on Washington. On Washington. Which actually has to do with something we're talking about here.

I want to bring up the issue of the t-shirt here, with the juror, and the picture that's been behind you the whole time. Look, there are two issues here. And Joey, we can start with you. Number one, is there something inherently prejudicial about the fact that he’s doing this, and, B, was he honest about his attendance at events on the jury questionnaire?

JOEY JACKSON: So with respect to number one, inherently prejudicial, we live in the United States of America. We have this thing called the First Amendment, freedom of speech. You can wear what you want, say what you want, do what you want.

The fact is that there was a questionnaire and there was disclosure with respect to prior activities, Black Lives Matter movements, et cetera. The critical issue, John, is whether or not he disclosed whether he participated in demonstrations regarding police brutality. Yes, he was at the March on Washington. The March on Washington as it relates to the African-American communities and communities of color deals with and relates to racial disparities in voting, in education, in economic disparities. It doesn’t have to do solely or exclusively or any of that with police brutality.

So the fact is you ask me the right questions, I will give you the right answers. He gave in my view the answers that were proper, and that is that, you know what? I didn’t participate in police brutality demonstrations.

PAUL CALLAN: Joey, one question for you. If that says knee off our necks. The issue in the case before the jury was a cop putting his knee on somebody’s neck and killing them as a result. That looks to me like it’s an exact reference to the fact pattern in the Floyd case.

JACKSON: So, I’m not suggesting there’s not an argument here. But what I’m suggesting is that the March on Washington is way above the issue, exclusively, of police brutality. It is an important issue in this country. But there are other important issues that relate to the African-American community that are not limited that are not limited to police brutality.

BERMAN: Counselors, I appreciate it. We’re going to have to take a brief recess.