The suggestion arises because twice this week, the network has broken out the m-word on behalf of pro-Biden causes.

On Wednesday, we caught New Day co-host John Berman hailing as a "miracle" President Biden's claim that by May, there'd be enough vaccine available for all American adults. Anyone recall CNN describing as a "miracle" the success of Trump's Operation Warp Speed, which led to the development of safe and effective coronavirus vaccines long before the "experts" thought that would be possible? Neither do I. And yet that achievement far out-miracles the current ramping up of production.

Today, it was CNN political commentator David Gregory's turn, calling it a "miracle" that despite the pandemic, "this was," as Alisyn Camerota had just stated, "the safest and most secure election in our history."  Gregory added that there was "no evidence of irregularities or fraud." 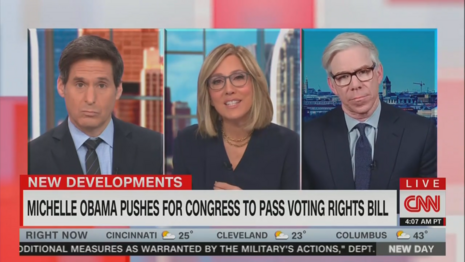 No evidence, really? It's true that the presidential election results have not been overturned in any state, and that William Barr, the attorney general appointed by President Trump, found no evidence of "widespread" fraud. But no fraud or irregularities at all?

In her New York Post column, Miranda Devine provided a good summary of a report on irregularities that had been prepared by Trump trade adviser Peter Navarro. In addition to citing specific instances of fraud, Devine noted:

Where the report is most compelling is in its thesis that, under cover of the pandemic, Democrats and allied voting-rights activist organizations managed to get voter ID requirements relaxed to such an extent that widespread ballot harvesting or outright fraud was able to occur without detection.

For example, the report cites 130,000 questionable votes in Wisconsin due to relaxed voter ID requirements for “indefinitely confined” voters who said they were unable to get to the polls in person. These voters were seen “attending weddings, riding their bikes, going on vacation and otherwise [being] anything but confined.” Yet they evaded the rigorous ID checks required for in-person voting.

The number of “indefinitely confined” voters in Wisconsin almost tripled from 2019 to 2020, when 200,000 people took advantage of relaxed voter ID laws due to the pandemic.

“This 130,000-vote increment of new indefinitely confined voters is more than five times the Biden victory margin in Wisconsin.”

Across battleground states, relaxed ID requirements for mail-in and absentee ballots “disproportionately benefited [Biden] because President Trump had a much higher percentage of in-person voters.”

The report also cites indications of ballot harvesting — for instance, 25,000 ballots requested from nursing home residents in Pennsylvania at the same time.

In Nevada, it claims Native Americans were “bribed” to vote by Biden operatives with Visa gift cards, jewelry and other swag.

Perhaps the biggest “tell” that something was amiss was the obstruction of Republican poll watchers in Georgia, Michigan and Pennsylvania, where they claim they were denied entry to ballot-counting centers or “directed to stand at unreasonably lengthy distances from ballot counters.”

Note: during the segment, Camerota also read at length from a twitter statement by Michelle Obama in support of a H.R. 1, a bill passed by the House that supposedly promotes voting rights but in fact opens the door to fraud by mandating, among other things, online and same day registration.

So, what Biden "miracle" will CNN hail next? For the answer, stay tuned to the Pro-Biden Miracle Network: you shouldn't have to wait long!

CNN's David Gregory hailing as a miracle that the 2020 election was supposedly "the safest and most secure election in our history" was sponsored in part by Land Rover, Publishers Clearing House,Tempur-Pedic, and Liberty Mutual.

ALISYN CAMEROTA: Republicans, as you know, David, in I think something like 40-plus state houses around the country, are now focused on what they call election security, what Democrats call voting rights restrictions. And, I mean, sometimes, Republicans have even admitted they're looking to sort of game how they can win again. And they have to put some of these provisions in, they believe.

I mean, as we know, from the people in charge, Republicans, even, this was the safest, most secure election in our history that we know of, or our recent history. And so the idea that all these measures are being fought for. How are we to interpret that?

DAVID GREGORY: Well, I think it's such an important point. And just to underline what you said. This was such a safe and secure election. It was a miracle we did it in a pandemic. And there was no evidence of irregularities or fraud.