Tiffany Gets Cross With The Mooch: 'Radicalized'? Or a 'Camera-Loving Opportunist!'

On Saturday, MSNBC host Tiffany Cross broke all the usual rules about how anti-Trump Republicans are used. She invited former Trump aide Anthony Scaramucci on her show to expose him, not to exploit him.

Cross began by showing a typical old clip of Scaramucci expressing his love for Donald Trump, which she claimed showed he has been "radicalized." She then proclaimed that she didn't want to "sanitize" him, suggesting that he is an "opportunist," who flipped from Trump supporter to Trump foe, and would turn again when the next opportunity arises.

MSNBC never plays this game with its cast of turncoat McCain veterans like Nicolle Wallace and Steve Schmidt.

TIFFANY CROSS: Anthony, I do want to start with you here. Because honestly, for all intents and purposes, if we look at a collection of sound bites for you, you were radicalized. And I want to how you became unradicalized. Let’s start with some old sound from you.

CROSS: So, Anthony, we just saw that. I have not been quiet about the fact that I don’t want to be part of this effort to sanitize people who rocked really hard with Trump and then thought better of it later. But because, as we just saw, you appear to have been radicalized by the MAGA party, I’m curious about what’s your advice on how we un-radicalize people who drank the Kool-Aid, so to speak?

It's a bit rich for Cross to be opposed to "radicalization" after her segments loving on the "trained Marxists" of Black Lives Matter.  But this was not a "thanks for being here." It felt like an ambush! 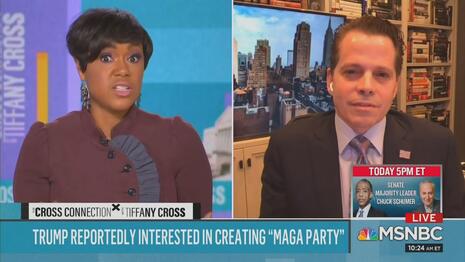 And I think you’re making a mistake about the whole sanitization thing. Because you’ve got 74 million people that voted for Mr. Trump and not all of them are hard-core MAGA people. There's probably 40 million or 50 million people that we need to create an off-ramp for so that we can unite and heal the country. So, if you go in that direction that high sanctimony and that high moral righteousness, I think it's going to be very damaging for the country going forward.

Did the Mooch never watch MSNBC? "High sanctimony" over Trump is the daily menu. Then the pair traded accusations of "loving the camera," which is the guilty accusing the guilty:

CROSS: I know you love the camera. I think there is a lot of people, you know, there’s this desire to want to sanitize people who rocked with this president. But quite truthfully, we always knew who Donald Trump was. He was very clear about that on the campaign trail. So this is someone you still opted to align yourself with. You still opted to go out there and advocate for him. You still opted to join the administration. So if you weren’t radicalized, were you an opportunist? And if so, what happens when the next opportunity presents itself?...

If only someone would try this accusatory tactic with the other "MSNBC Republicans." But Nicolle Wallace is now hosting two hours a day, making radicalized noises about drone attacks on Donald Trump on and his alleged domestic-terrorist supporters.

Cross got in a parting shot regarding The Mooch's love of the lens, sarcastically saying, "I have no doubt you'll show up on the TV screen again soon." Bada bing!

The nasty spat between Tiffany Cross and Anthony "The Mooch" Scaramucci was sponsored in part by Walmart, LegalZoom and T-Mobile.