Forget the coronavirus. A new pandemic has broken out, one targeting the liberal media: the Chills Virus!

"Biden landing at Joint Base Andrews now. I have chills."

In addition to chills, the blighted Berman was suffering from another virus symptom: shortness of breath. He introduced the Gorman segment by saying it was a "breathtaking" moment.  And don't you just love Berman prefacing his "chills" by assuring he was saying it, "aside from politics." Right!

Anderson Cooper trended on Twitter last night by interviewing Gorman and gushing about her poem: “Wow. Um, wow. You’re awesome. I’m so transfixed.” He also said "President Gorman has a nice ring to it." “Yes, it does,” she replied. “Madam President Gorman. I like the sound of that.” 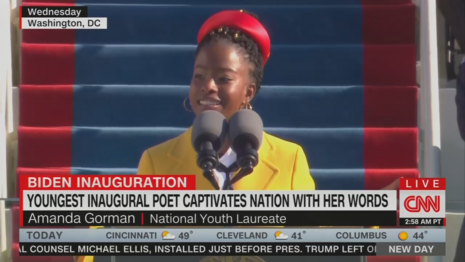 We wish Wolfe and Berman and Cooper speedy recoveries. But don't expect that to happen anytime before the end of the Biden administration. And don't look for Biden to announce a new Project Warp Speed to combat the Chills Virus. To the contrary, he would surely have the entire liberal press corps injected with the virus—except he's confident that's unnecessary. They're already infected.

Note: Lauren Wolfe's Twitter account appears to have disappeared in the wake of the well-deserved mocking she received for her "chills" tweet. But our eagle-eyed Media Research Center caught the tweet before it vanished, and tweeted in reply: "prepare for four years of this from the media."

CNN's John Berman suffering from the Chills Virus was sponsored in part by Expedia, USAA, Chewy, and ADT.

JOHN BERMAN: A breathtaking moment at President Biden's inauguration. A moment where you had a sense the entire world was stopping to pause, TO lean in and listen a little more closely. We all heard from the nation's first Youth Poet Laureate, Amanda Gorman.

AMANDA GORMAN: When day comes, we ask ourselves, where can we find light in this never-ending shade? The loss we carry. A sea we must wade. We've braved the belly of the beast. We've learned that quiet isn't always peace, and the norms and notions of what just is isn't always justice. And yet the dawn is ours. And yet the dawn is ours. A nation that isn’t broken but simply unfinished.