On this morning's New Day, Reiner veered into the foreign policy field, declaring that for months, he's believed that only "regime change" in the US could bring the pandemic under control.

A generous spin is that just means an election. But as this Foreign Policy magazine article explains, "regime change" is typically defined as "toppling other countries' governments." The article gives as examples the Iran coup of 1953, in which the elected Prime Minister of Iran was overthrown, and American action removing [and ultimately leading to the death of], Iraq's Saddam Hussein and Libya's Muammar Qaddafi.

The CNN segment centered on the lower-than-hoped-for pace of vaccinations in the US. Substitute host (and former Obama aide) Jim Sciutto was only too happy to egg Reiner on, saying that an effective vaccination strategy "is not happening under this president, clearly. He's checked out on the pandemic, and he's golfing, and he's challenging the election based on nothing." 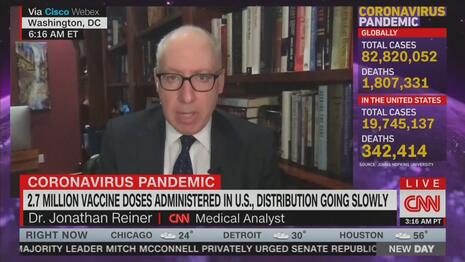 For Reiner to say he's been advocating US "regime change" for months raises the question of just how far he would have been willing to go in removing President Trump?

Note: Reiner claimed that somehow,"magically, like a gift from God, we actually get two vaccines that are spectacularly effective." Aren't liberals the ones who "believe in science?" But acknowledging the role of science would have required Reiner to give credit to the hated Big Pharma . . . not to mention President Trump's Operation Warp Speed initiative!

ALISYN CAMEROTA: In terms of where we are with vaccinations, I think 2.8 million Americans reportedly have been vaccinated. As you know, as of today, we were supposed to be at 20 million, I mean, according to the early predictions from the administration. So, that’s a fraction. That’s really disheartening.

And also, we’re just falling behind other countries. Other countries are doing this better in terms of getting people vaccinated. So, for instance, Bahrain, doing better. Israel, doing better. The UK, doing marginally better. We’re doing a little bit better than Canada. But still, what do we need to do here to make this better?

JONATHAN REINER: We need a sense of urgency. We’ve been waiting, you know, for a vaccine. And magically, like a gift from God, we actually get two vaccines that are spectacularly effective.

And we’re just sort of leisurely administering them in the United States . . . So we have, literally, 10 million doses sitting on the shelf around the country, waiting to go into arms.

We need mass events, we need to vaccinate on a large scale. And when I hear [Assistant Secretary for Health] Admiral Giroir yesterday saying, well, there'll be in CVS and Walgreens pretty soon, people will be able to go there and get them. No, no. We've seen, sadly, in large parts of the country, thousands of cars lined up for food-giveaways. We know how to do that. We can give vaccines the same way. We need large events, at football stadiums, racetracks. We need to go into mass-vaccination mode, and we need to do it now. And I just don't see the urgency.

JIM SCIUTTO: It’s not happening under this president, clearly. I mean, he’s checked out on the pandemic, and he said explicitly , it’s up to the states, it's not my problem. And he’s golfing. And he's challenging the election based on nothing.

REINER: Well, I’m sure they’re already working on this. You know, many of us have thought over the last several months that we were only going to get this pandemic under control with regime change. Because the outgoing administration just didn’t have what it takes to do that.