They Need Help: MSNBC Freaks Over 'NO LIMITS' to Trump's Madness

Trump Derangement Syndrome is no laughing matter. The Trump-hating guests on today's AM Joy on MSNBC quite literally appeared to have lost their marbles. The deranged collective view of Sarah Kendzior, Elie Mystal, and Tara Dowdell can be summed up as follows:

President Trump is a "sadistic" psychopath who intentionally inflicted COVID on blue states, thereby committing crimes against humanity. The international community should impose sanctions on the US, and corrupt leaders like Trump should be "hauled off" to the International Criminal Court in The Hague. Finally, regardless of who wins the election, Trump will encourage violence, and there will be violence. Got all that?

Here's how it all broke down:

SARAH KENDZIOR: He is a kleptocrat. He came in to abuse executive power, to enhance his personal wealth and he went on to do all the typical things that a kleptocratic, authoritarian leader does. Which is purge agencies, pack courts and bend the law so that he is, in his view, no longer breaking it. That's why he has henchmen like Bill Barr.

And one thing that makes Trump unique, because not all kleptocratic, authoritarian leaders are the same, is his sadism, which came through in Mary Trump's interview, that has also been pointed out by a number of experts on mental health and on authoritarian rule. There are no limits with him!

ELIE MYSTAL: If Donald Trump was the leader of an African nation that white people couldn’t pronounce, the international community would be looking into him for crimes against humanity . . . When I read that report in Vanity Fair about how Jared Kushner just poofed a national testing plan, because he believed only people in blue states would die of this disease, as if people in Florida have never met people from New York.

What I see is a crime against humanity. And what I would like at this point since our American system has completely failed to hold Trump accountable in any way, I would like to see the international community start to come in and impose sanctions on our country, and seriously think about hauling off some of our corrupt leaders to The Hague where they belong.

MAXWELL: We’re not going to know on election night potentially who the victor will be, and so I want to know what keeps you up at night.

KENDZIOR: What worries me is violence regardless of who is proclaimed the winner that night. I think he will encourage violence. I think there will be violence.

While all the guests manifested varying degrees of derangement, Kendzior, a frequent MSNBC guest, literally seemed on the verge of losing it on live TV. Check the video at 0:36 as a disturbed Kendzior inveighs, "THERE ARE NO LIMITS WITH HIM!" 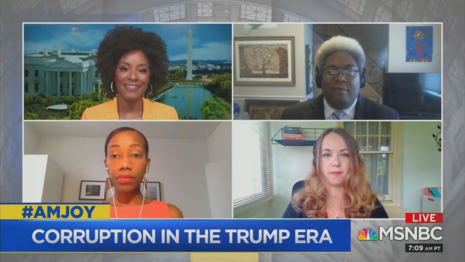 In fact, President Trump has demonstrated that he does recognize limits. Despite the non-stop stream of denunciations of the president emanating from MSNBC and CNN, their hosts and guests remain free to continue their daily diatribes, without interference or retribution from the White House.

Note that Elie Mystal also managed to work some anti-white racism into his spiel. He said that Trump would be accused of crimes against humanity "if he was the leader of an African nation that white people couldn't pronounce." Imagine if a person of pallor had said something similarly insulting regarding African-Americans and European countries!

With Joy Reid having moved on from the show to host The Reidout in weekday prime time, MSNBC continues to audition possible replacements. Today's guest host, Zerlina Maxwell, twice responded to the horror scenarios her guests were painting by exclaiming, "that's so scary!" What's truly scary is the derangement these people display!

The display of Trump Derangement Syndrome was sponsored by Proctor & Gamble,Volvo, GoDaddy, and Philadelphia Cream Cheese.