Mika: Will Bloomberg Put 'Money Where His Mouth Is' to Get 'Pass' from Al Sharpton? 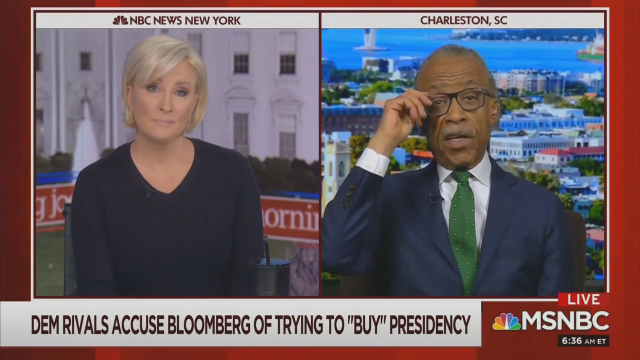 Rev. Al Sharpton has been doing an elaborate kabuki dance over expressing his support for Michael Bloomberg. Sharpton ended his MSNBC show on Sunday night by saying that whereas he would hold Bloomberg to account for stop-and-frisk and his handling of the Central Park case, he also wanted "all candidates to tell me and the public that they have also erred" on racial matters, specifically calling out Biden, Sanders, and Klobuchar. Sharpton thus left the door open for Bloomberg.

On Morning Joe today, Mika Brzezinski told Sharpton that he was in a position to grant Bloomberg a "pass" on racial issues. Saying that Bloomberg was "certainly looking for" such a pass, Mika wondered whether Bloomberg would "put his money where his mouth is?"

What is she asking? That Bloomberg give money to Sharpton's National Action Network? As the MSNBC screen hinted about Bloomberg "buying" the presidency?

Sharpton replied saying he wasn't giving anyone a pass, which is odd, considering the dog-and-pony show where presidential candidates come to his National Action Network events to plead for his support. And when Sharpton trashed Bloomberg "ignoring" blacks as mayor last Thanksgiving, the New York Post editorial board wrote "Sharpton was conspicuously quiet in the Bloomberg years — a low profile that most observers attributed to the billionaire’s private giving to NAN."

The Rev repeated his shtick about wanting to hold all the candidates accountable, not just Bloomberg. And it wasn't too hard to read between the lines when Sharpton said things like this:

"I, again, would challenge him to show in any way, shape or form why we ought to believe that he is sorry . . . Bloomberg [has] to demonstrate if he can, and that’s a big question, that he wants to try and repair or at least make an effort toward the damage he did...Clearly Bloomberg has a lot that he has to show for."

Hmm: what could Al possibly have in mind?

MIKA BRZEZINSKI: So Reverend Al, [Bloomberg] is a disruptive force and you are in a position to give him the support he needs, or the pass he needs. And I’m certain he’s looking for it . . . What do you know about Mike Bloomberg in terms of being able to believe him? And knowing whether he will put his money where his mouth is?

AL SHARPTON: Well, if he’s looking for a pass from me, he needs to go to the next pass. I’m not giving anyone a pass. I, again, would challenge him to show any way, shape or form why we ought to believe that he is sorry when he did it four days before he announced for president, announcing that he was sorry [about stop and frisk.]

And I am just saying that at the same time, and I said this when I ran in ‘04 to those candidates then. Everyone needs to come on and show us what they’re doing . . . I clearly led a lot of the marches and rallies against Bloomberg, and I've clearly held him to task on this, but I don’t want to say that everyone shouldn't be held to task. But under no circumstances am I saying that Michael Bloomberg should not have to demonstrate, if he can, and that’s a big question, that he wants to try and repair or at least make an effort toward the damage he did.

But I also want to know Tom Steyer, the other billionaire in the race. How many blacks work in your companies? I want to know about the issues I’ve raised on Biden and Bernie.

And I think that if we give anybody a pass, then it looks like we’re only being political to do it on one candidate. I think that they all need to come clear, but clearly Bloomberg has a lot that he has to show for.