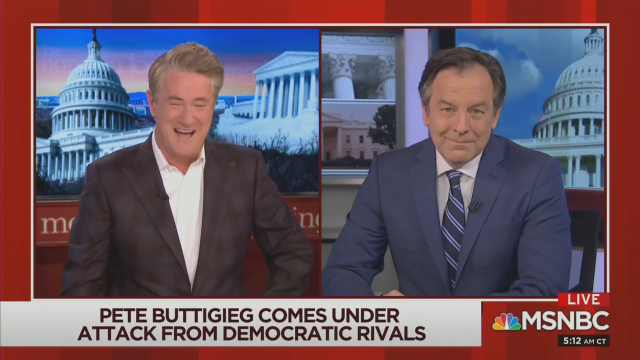 If Joe Scarborough had been around to cover the Hindenburg disaster, he might well have called it a business "godsend" for the airship industry [which promptly went extinct].

We say so in applying the same reasoning that Scarborough used on today's Morning Joe. Scarborough twice claimed that the scandal surrounding Hunter Biden's influence-peddling gig with the Ukranian gas company Burisma has been a political "godsend" for his father Joe.

Scarborough's theory was that the fact that President Trump supposedly pushed the Ukrainians to investigate the Biden-Burisma connection is proof of how much Trump feared Joe Biden as an opponent, thus elevating Joe's stature in the eyes of his fellow Democrats.

JOE SCARBOROUGH: Rick Tyler, my gosh, we were having a debate at the beginning of this impeachment inquiry as to whether Hunter Biden was going to hurt Joe Biden, whether all the attacks were gonna hurt. My God, no! It’s been a godsend for Joe Biden! Because now every Democrat said, hey, wait a second, why is Donald Trump so freaked out about running against Joe Biden that he will risk impeachment? That he will hold up $400 million in military aid for a democratic ally being invaded by Russia? Why would he do that just to get back at Joe Biden?

So a lot of times, you getting attacked from others, whether it’s other people in the Democratic field, or whether it’s the President of the United States, that’s actually a political godsend. It has been for Joe Biden over the course of the past month, and last night I think it was for Mayor Pete.

Maybe Scarborough hasn't noticed, but Donald Trump has a history of going after all his potential opponents. Think back to the 2016 primary, when Trump had an unflattering nickname or line of criticism for virtually all his many Republican competitors. Not to mention "Crooked Hillary."

So in no way has Trump singled out Biden. The President's an equal-opportunity razzer. And if Biden should become the Democrat candidate, much more attention will undoubtedly be paid to Hunter's influence-peddling in Ukraine, China, and elsewhere. Just how much did he rake in? And what was the degree of daddy Joe's involvement? Does Scarborough sincerely think Joe would be viewing his wayward son as a political "godsend" then?

Note that Scarborough uttered his "godsend" line in the context of claiming that Pete Buttigieg actually benefited from the various attacks on him launched by other candidates in last night's Democrat debate. Notable among them was the tit for tat between Elizabeth Warren and Buttigieg, in which she attacked him for raising money in a high-end donor event in a wine cave where $900 bottles of wine were served. Buttigieg riposted that Warren shouldn't hold him to "purity tests" that she herself couldn't pass.