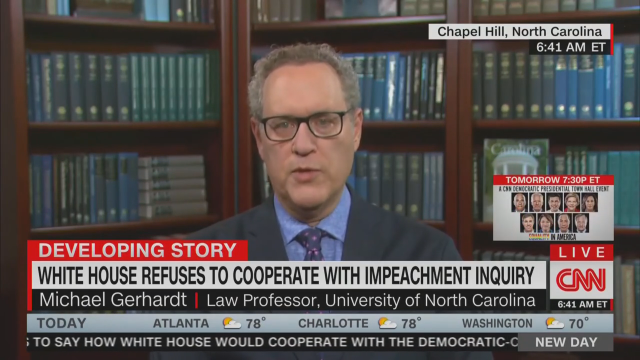 On the face of it, Michael Gerhardt is qualified to serve as a CNN legal analyst on constitutional questions. He is, after all, a Distinguished Professor of Constitutional Law at the UNC School of Law in Chapel Hill, and a Scholar in Residence at the National Constitution Center.

But there was one part of Gerhardt's resume that CNN hid when New Day's John Berman on Wednesday brought him in to comment on President Trump's decision not to cooperate with the House impeachment inquiry: Gerhardt is also a long-time Democrat activist. As per Wikipedia:

Gerhardt predictably proceeded to echo Berman's assertion that President Trump's refusal to cooperate with the Democrat-led impeachment inquiry is unsupported by the Constitution. To the contrary, asserted Gerhardt, “The House has rules. They’re following those rules. And all of that is legitimate. The president doesn't get to tell the House what to do.”

Note: there was an amusing moment in which Gerhardt failed to take the hint when Berman teed him up to say that Republicans are wrong in asserting that Democrats are trying to undo the 2016 election. Berman asked what happens when a president is impeached and removed from office. Gerhardt gave a bland answer about the president returning to private life. So Berman himself had to provide the Dem-friendly answer he was looking for, pointing out that the VP becomes president, thereby, according to Berman, confirming the result of the election.

JOHN BERMAN: This morning the White House is refusing to comply at all with the congressional impeachment inquiry claiming the probe is both unconstitutional and a violation of due process. The problem with that argument turns out to be the Constitution. Let’s discuss with CNN legal analyst Michael Gerhardt. He's a constitutional law professor at the University of North Carolina. Professor, I’m so glad you’re here. Can you point me to the part of the Constitution where it says that Congress has to vote to launch an impeachment inquiry?