You Won't Believe Which Dem Scarborough Thinks Would Beat Trump

Time for Teresa to dust off her recipe for gin-soaked raisins?

Of all the Dems vying for the presidential nomination, Joe Scarborough has singled out one who's not even in the race as the person who not only could, but would, beat President Trump in 2020: John "Liveshot" Kerry.

On today's Morning Joe, the panel was musing over the latest poll results on Dem contenders [see screencap below].Kerry was in there at a lowly 4%. But that didn't deter Scarborough from declaring that the failed 2004 candidate would win in 2020.

Scarborough's theory was that, in contrast with Joe Biden, Kerry likes to raise money and is good at it. Moreover, Scarborough claimed that Kerry came close to beating sitting President George W. Bush in 2004, "right after 9/11." Uh, Joe: the 2004 election was more than three years after 9/11. And in a year when Dems are clamoring for a woman and/or a person of color, Kerry-the-whitebread-preppy makes Joe Biden look like Lil' Kim.

Mike Barnicle seconded Scarborough's view, saying that he had recently spoken with "a very, very sophisticated observer of American politics" who said Kerry had the best chance of beating Trump. 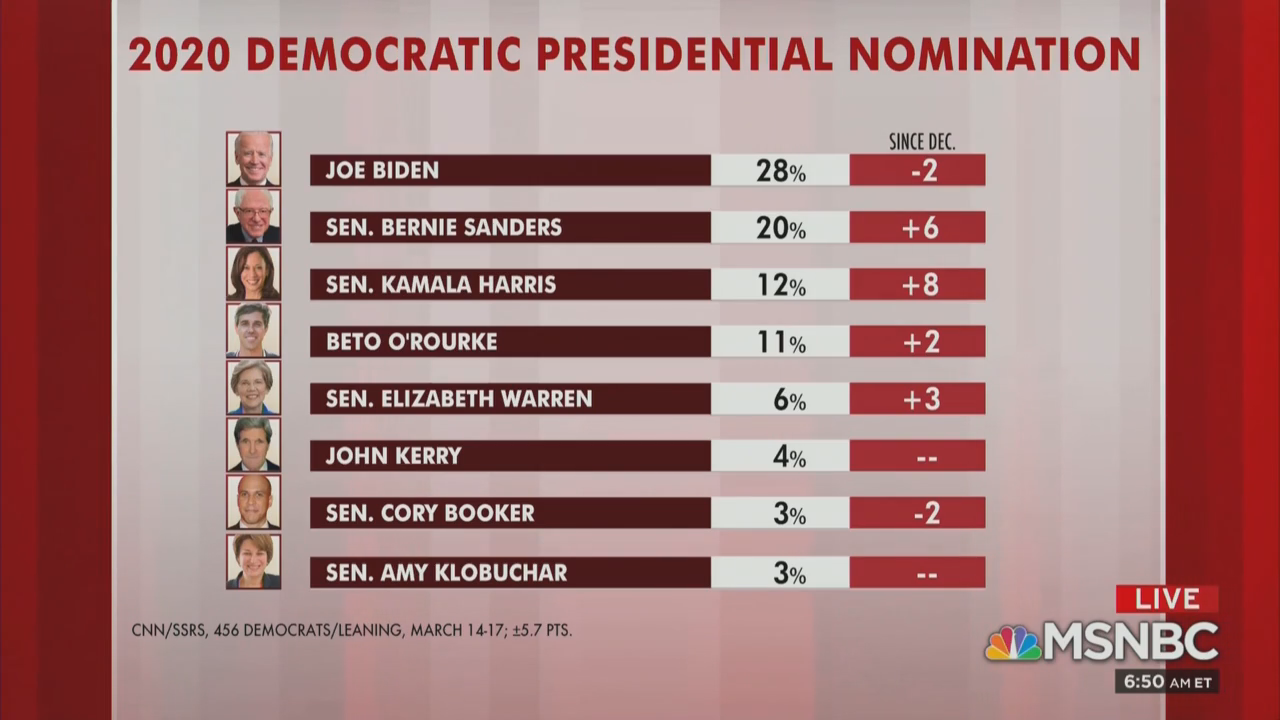 Note: there were a couple of interesting factoids emerging from the poll. First, that Kerry, who is far from even entering the race, polls ahead of Cory Booker and Amy  Klobuchar, spells trouble for the latter two. And here is an encouraging data point for Trump fans: Republicans are more energized than Dems. 57% of Republicans are "extremely enthusiastic" about voting in 2020, compared to just 46% of Dems. A surprising result if you listen to the MSM, which portrays an America itching to dump Trump.

Finally, you can be sure that, whoever it turns out to be, Scarborough will be voting for the Democrat in 2020. In a mind-boggling Washington Post column of yesterday, ex-Republican Scarborough declared that he would support a Constitutional amendment permitting Obama to run two more times, and would "race to the nearest voting booth" to vote for him! Scarborough incredibly claimed that Obama was "the most significant president since Abraham Lincoln."

JOE SCARBOROUGH: Willie, I see one person on that list that I can tell you today would beat Donald Trump. Who is it? Who would you think it is?

WILLIE GEIST: Who do I think you think it is?

SCARBOROUGH: Who do you think I think it is?

SCARBOROUGH: For all the reasons I told you I'd be worried because of the Sabermetrics of Joe Biden. He's done it in '88, he's done it in 2008. He doesn't like raising money. You think about all of those things. Now you back to John Kerry's one shot in 2004, running against a sitting president, right after 9/11, right after the beginning of, at that time, a popular war. John Kerry raised tons of money. He knows how to do it. Joe Biden doesn't. John Kerry likes raising money. Joe Biden doesn't like to do it. John Kerry came within 80,000 votes in Ohio of being the next President of the United States. Again, a couple of years after 9/11, in the middle of a war. John Kerry, if he ran, would win. That's all I'm going to say. That's all I'm going to say.

MIKE BARNICLE: It's pretty interesting that you say that.

SCARBOROUGH: He would be the 46th President of the United States if he announced today he was running. And nobody could stop him.

BARNICLE: I have a very, very sophisticated observer of American politics, who you both know very well. I was out with him last week. We were just walking around, and he was looking at the field and he said to me, he said, you know who has the best chance of doing this and he's not in it?. I said no, who? He said John Kerry.

BRZEZINSKI: Okay. There you go.

SCARBOROUGH: I thought I was alone.