Someone remind me: isn't there a term for people with this sort of fixation? Joe Scarborough just can't stop looking at and talking about Marco Rubio's footwear, ever since a photo recently appeared of Rubio sporting a pair of boots.

On today's Morning Joe, Scarborough repeatedly circled back to the subject, managing to work it into a number of conversations. For example, when Mika Brzezinski cited a report that Rubio has shifted his message from optimism to "doom," Scarborough jumped in: "what? Did he break a heel?"

Scarborough has a well-documented animus toward Rubio, and the boots clearly represented another chance for Joe to jab at the junior senator from Florida. At one point, Scarborough suggested Rubio was compensating for short stature. Joe claimed that Rubio might be as short as 5'6", whereas he is actually 5'10".

JOE SCARBOROUGH: Let's talk about Marco Rubio's heel height. Would you let your husband wear that? I'm just asking: would you allow your husband to wear those go-go boots?

NICOLLE WALLACE: No, no, no. I like them sweaty. I've got a few issues. Men in heels is like. He's not short is he?

WALLACE: Someone Google it.

JOE: Look at those go-go boots, right. They're elevator boots.

JOE: What? What's wrong? Did he break a heel?

MIKA: No. You are being so bad.

JOE: Is that what you call elevator boots? Are those heels? What are those?

WALLACE: I think the term is a stacked heel.

MIKE BARNICLE: He needs a lift.

JOE: We all need a lift.

GEIST: I wouldn't choose them. But I respect his choice.

JOE: I'm sure a lot of people that file into f
factories --

JOE: I'm sure a lot of people that file into work at Dunkin Donuts or in factories all in New Hampshire probably go in in those Harry Styles elevated go-go boots. So I don't know why you are you are even making, why are you even talking about his go-go boots?

GEIST: We're going to put those aside for a minute--

JOE: Do we have a picture of the go-go boots? 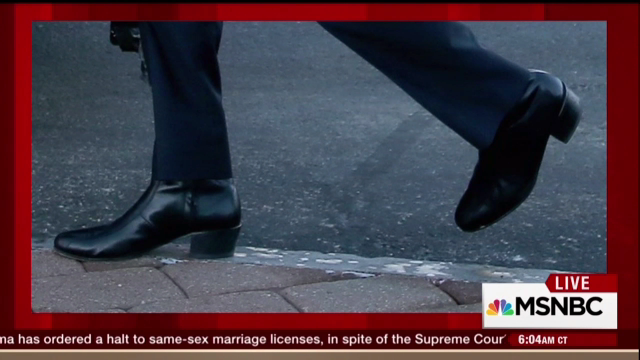