President Obama knows he's in trouble when Andrea Mitchell—Andrea Mitchell!—proclaims the IRS and AP scandals to be among "the most outrageous excesses I've seen" in all her years in journalism [which pre-date Watergate].  The strength of Mitchell's statement drew gasps from Scarborough and Brzezinski. Then Ron Fournier, former AP editor now with the National Journal, darkly described the White House being "consumed" if it turns out someone there or in the Obama campaign had been aware of the IRS targeting of conservative groups. It happened on Morning Joe today.

But hey, President Obama still has his hangers-on.  Take good old Carl Bernstein.  As we reported, on yesterday's Morning Joe Bernstein blathered that he "can't imagine" that President Obama coudl be involved in the IRS mess.  And there was Bernstein again today.  When Fournier spoke of consequences of White House or Obama campaign knowledge of the IRS targeting, Bernstein quickly burped out that "we have no evidence of that whatsoever."  Joe Scarborough had to remind the former Watergate reporter: "that's why you have investigations.  You know that." View the video after the jump. 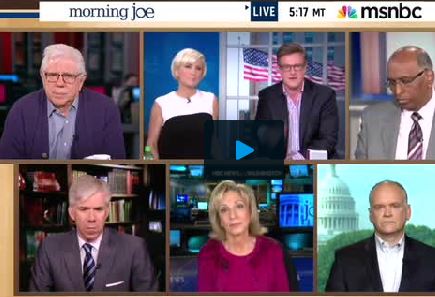 Watch the clouds gather over the White House.  And when among your few umbrellas are the likes of Carl Bernstein . . .

Note: The screencap brings Hollywood Squares to mind.  PRESIDENT OBAMA: I'll take the joker in the upper left-hand corner for the block!

ANDREA MITCHELL: Yes, they did have to look and see whether some of these groups were political rather than pro bono. But not in any kind of non-neutral way. The test had to be neutral. The fact they went after the Tea Party here as David said earlier feeds the Republican critics --

MIKA BRZEZINSKI: It really does.

MITCHELL: And this is one of the most outrageous excesses that I've seen in all my years in journalism.

MITCHELL: We knew about the past national security probes, but I think this Associated Press investigation just rises to that standard, as well. The press is not popular, we are not popular. But this is, I think, an outrageous invasion of constitutional rights.

SCARBOROUGH:  Andrea, it's remarkable.  As long as you've been a reporter at the top of your game, to say that a scandal that broke on Friday is one of the most outrageous excesses, the IRS scandal, and then for us to talk about what happened yesterday that most reporters agree with Ron and you, it rises to that level as well. To have two of these falling in two successive business days is going to require a dramatic reset inside the White House, is it not?

MITCHELL: And I don't see why they don't get that yet.

RON FOURNIER: The IRS thing, to me, I think that's the one that has the most chance to be a game changer. If we find out in these hearings that somebody in the White House, especially in the political shop, or somebody in the campaign knew about this political targeting of conservative groups, I think that could be something that could consume the White House for the rest of his second term.

SCARBOROUGH: I agree. That is the key.

FOURNIER: I'm not pleased to say that.

CARL BERNSTEIN: We have no evidence of that whatsoever.

SCARBOROUGH: How could we, Carl? Of course we don't have any evidence of that, but that's why you have investigations.  You know that.  I know that.