As per his 1994 NRA questionnaire, Joe Scarborough: Opposed an assault weapons ban.  Opposed expansion of background checks.  Opposed limitations on magazine sizes.  Today, he supports all such measures.

So how would you describe his two very different sets of opinions?  Why, as being "very consistent," of course--if you're Joe Scarborough. On today's Morning Joe, responding to the NRA's promulgation of the NRA questionnaire he submitted in 1994 as an aspiring Republican congressman, Scarborough did indeed claim that his positions today, despite the multiple flip-flops, are "very consistent."  View the video after the jump. 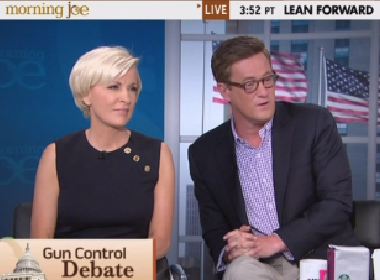 Scarborough misled with his remarks. He said that with respect to expanding background checks, he was simply taking a position that the NRA's Wayne LaPierre had taken in 1999 and that President George W. Bush had taken in 2000 and 2004.  That might lead a viewer to think that he had supported such expanded checks in his 1994 questionnaire.  In fact he firmly opposed them.  And Scarborough never even attempted to explain how his positions on assault weapons and magazine capacity had, ahem, evolved.

Note: I'd encourage readers to have a look at the actual questionnaire, including handwritten comments from Scarborough, some of them underlined, stressing his ardent support for Second Amendment rights with "no compromise."To claim that his positions today are "very consistent" with those expressed in that questionnaire shows contempt for his viewers' intelligence.

JOE SCARBOROUGH: I get off the air and somebody calls me and says you know the NRA has leaked your 1994 questionnaire. The NRA went back 20 years to try to find my questionnaire, which by the way is very consistent what I feel today. I fully believe in Second Amendment rights. No compromise on Second Amendment rights. Scalia confirmed in 2008 that my view on the Second Amendment was right all along. And so the NRA though, is just going crazy and they're leaking things to web sites for me taking the same position Wayne LaPierre had in 1999 and Bush had in 2000 and 2004. Then last night on Fox, they had this entire segment that was just pushed by the NRA about how I'm a big liberal for taking Wayne LaPierre's stance in 1999. They're really, really nervous.

DONNY DEUTSCH: They should be.

SCARBOROUGH: They should be.