Yet another Obamaoid has joined the Ann Romney-bashing brigade.  Hilary Rosen, with her "never worked a day in her life" line, was infamously first.  As documented at NewsBusters, the president of NOW subsequently derided Ann Romney as lacking in "life experience" and "imagination".  Then, feminist author Michelle Goldberg attacked Ann as "insufferable," her writing as "creepy," and even compared her to Hitler and Stalin.

Latest to join the all-women lineup of Ann bashers: Betsey Stevenson.  A former top economist in the Obama administration, appearing on Chris Hayes's MSNBC this morning, Stevenson accused Ann, along with Mitt, of "really having no empathy for people."  View the video after the jump. 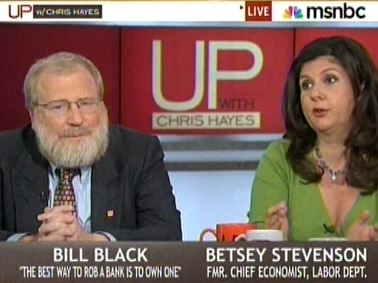