Morning Joe Sloughs Off Solyndra: 'No There, There'

What a curiously incurious Morning Joe bunch!  Joe Scarborough says Solyndra "is just not a story I have focused on" and John Heilemann similarly admits to not having "drilled down" on the matter.  Meanwhile, Harold Ford, Jr. assures us that when it comes to any potential Solyndra scandal, "there's no there, there" and that no one "has done anything illicit here at all."

A blasé Joe Scarborough grudgingly introduced "this Solyndra thing," citing those pesky "conservatives on Twitter" who keep raising it.  The show deigned to devote under two minutes to the story, with nary a mention of the facts that the main driver behind Solyndra was a major Obama fundraiser, that the Bush admin blew off funding for Solyndra after concluding their products weren't competitive and that Solyndra execs are now taking the Fifth. View the video after the jump.

Watch how Scarborough, Ford and Heilemann slough Solyndra off.

JOE SCARBOROUGH: John, tell me about this Solyndra thing.  Because every time I go on Twitter, conservatives are accusing us of covering up this story which I, I, from what I understand the president pushed to get money to them --

MIKA BRZEZINSKI: A lot of money.

SCARBOROUGH: -- a lot of money to them, and they went bankrupt. So are we--I mean, it's just not a story I have focused on.  Is this a big story? Has the White House done anything wrong?

JOHN HEILEMANN: I think that is the question that is in dispute.  The White House was obviously in favor--in the first stimulus bill they were in favor of putting money into some degree, into green energy projects. This was one of the projects that got money.  Part of the question is whether the White House was in some way improperly fighting for this particular company.

SCARBOROUGH: Harold, there's a hearing today on Capitol Hill, and I guess executives are coming.  Do you think there's a there, there?

SCARBOROUGH: You're not saying that as a supporter of the president.

FORD, JR.: I think it's a bad set of facts, but is there any there, there?  No. I think if you look at where a lot of this alternative [energy] money went, it went for batteries in the Michigan area where jobs were being created. This was a bad case and the administration has owned up to it and said look, we might have missed some things here. And I think the political question is whether or not the White House was trying to rush to get Vice-President Biden there before the company to make a big case and make a big splash. But I don't think there's a there there. I don't think anybody's done anything illicit here at all. 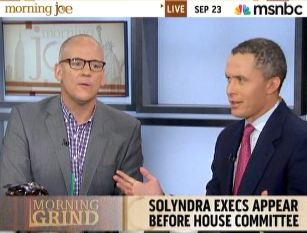