Scarborough Slams Bachmann As 'A Joke'

In a classic, table-pounding, tell-us-how-you-really feel rant, Joe Scarborough has ripped into Michele Bachmann, calling the Minnesota congresswoman and her candidacy "a joke."

Watch Joe let it all hang out in bashing Bachmann.


JOE SCARBOROUGH: Michele Bachmann's first answer, Mark Halperin, was "I wish the federal government had defaulted."  Had defaulted, a week after Americans had lost--some of them perhaps lost half of their pensions. Lost half of their 401(k)s, when trillions of dollars went down the drain [pounds the table] with Americans suffering, she said that and got applause, and if anybody thinks that guys like my dad are going to be voting that way when this rolls out of Iowa and New Hampshire and South Carolina, in the early stages, and really gets going, they are out of their mind and they are too stupid not only to prognosticate, they are too stupid to run Slurpee machines in Des Moines. I'll let you go now.  I got it off my chest.

Michele Bachmann is a joke. She is a joke. And now I will pass it on to you.  Her answer is a joke, her candidacy is a joke, and anybody that sits here and says she has any chance of winning anything is out of their mind.  Take your straw poll, take your caucus, but Iowa, if you let her win, you prove your irrelevance once again. 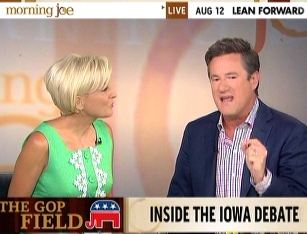