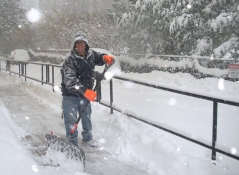 By now, we're all familiar with the global warmists' attempt to explain away the record-breaking mid-Atlantic blizzards.  Take this, for example, from the New York Times [emphasis added]:

"government and academic studies had consistently predicted an increasing frequency of just these kinds of record-setting storms, because warmer air carries more moisture."

So more snow fell from Philly to DC because the temperatures were warmer than normal during the blizzards?  That got me wondering: just what were the temperatures in DC on the snow days, and how do they compare to the norm?  And guess what?

To spin these facts as proof that the blizzards are evidence of global warming because "warm air holds more moisture" is bunk.