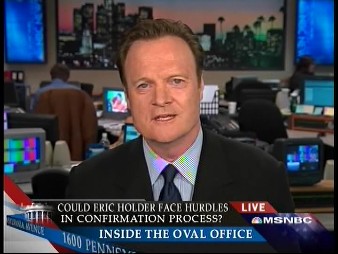 Admission: Lawrence O'Donnell is emerging as one of my favorite media liberals.  On the one hand, almost exactly one year ago, his anti-Mormon rant spurred me to action.  But lately, watching him as a frequent MSNBC guest, I've been impressed by his acumen and willingness to call them as he sees them.

Take O'Donnell's intervention on tonight's "1600 Pennsylvania Avenue," where he made the salient point that the scandal of the Marc Rich pardon is, ironically, being held against AG nominee Eric Holder . . . while Hillary Clinton skates.

DAVID GREGORY: Let me turn, Pat Buchanan, to a potentially troublesome area for one of his designees for the cabinet. And that of course is the Attorney General nominee, Eric Holder, who served, of course, as the number two in the Clinton Justice Department and got in a lot of trouble on this Marc Rich pardon that happened at the very end of the Clinton administration, on the last day. He's admitted mistakes.  This is Richard Cohen today writing in the Washington Post the following:

A better attorney general nominee you're not likely to find . . . the pardon excepted. But the pardon cannot be excepted. It suggests that Holder, whatever his other qualifications, could not say no to power . . . Holder was involved, passively or not, in just the sort of inside-the-Beltway influence peddling that Barack Obama was elected to end.

GREGORY: Number one, does this issue specifically come back up and is it part of a larger issue for Obama, about not living up to the sort of change that he promised on the campaign trail, Pat?

After calling the episode "squalid" and "seedy," Pat predicted that the Dems will nonetheless stand behind Holder.  O'Donnell then unloaded.

LAWRENCE O'DONNELL: The irony of this is that the single biggest problem we have identified for anyone approaching the confirmation hearing in the Obama administration is a Clinton scandal problem. And it is not being attached to the Hillary Clinton confirmation process, as she moves forward. I mean, this was a very deeply scandalous period in the Clinton presidency.

These pardons were going out the door and Hillary Clinton's brothers were involved in getting these pardons for people. And it is as dirty as we've seen since the Nixon administration: and it's hard to beat the Nixon administration.  But in those terms, we haven't seen anything worse. And for it to be haunting Eric Holder instead of Hillary Clinton is really ironic at this stage.