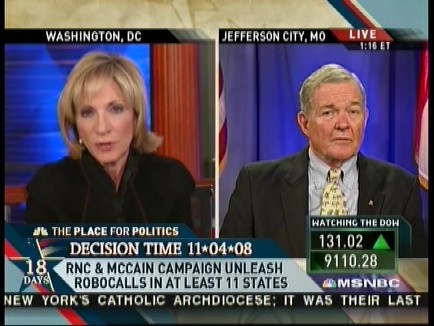 They [the RNC] are calling voters, cold calls, and saying to them, what about William Ayers and the close working relationship he had [with Obama], which is not true by anybody's count . .  . It certainly is a mischaracterization of the relationship. -- Andrea Mitchell to Sen. Kit Bond (R-Mo.), MSNBC 10-17-08.

It's turning into Andrea Mitchell Day here.  Earlier, I noted how Mitchell, measuring the drapes for Obama, predicted that he would run a "bipartisan" administration.  Now Mitchell has ridden to Obama's defense, denying that he ever worked closely with Wiliam Ayers. 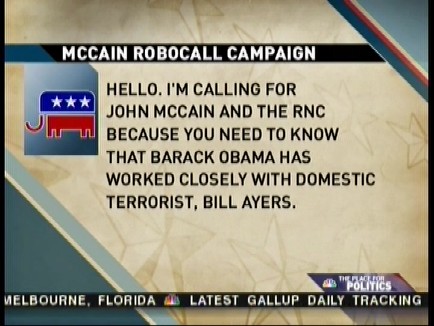 During MSNBC's 1 PM EDT hour today, Mitchell was interviewing Missouri Republican Sen. Kit Bond, and invited him to address the "ethics, even the legality" of robo calls being made in Missouri by the Republican National Committee informing voters that Barack Obama had worked closely with domestic terrorist Bill Ayers.  Bond indicated that he hadn't heard the calls and wasn't sure in any case who was behind them.  Mitchell assured Bond that the RNC had confirmed that they were indeed making the calls.  And as noted above, Mitchell claimed that it "is not true by anybody's count" that Obama worked closely with Ayers, adding later that the statement in the call "is a mischaracterization of the relationship."

When's the last time Mitchell had Stanley Kurtz on her show, if ever?  Harvard Ph.D. Kurtz, a distinguished scholar, fought to get access to the files of the Chicago Annenberg Challenge, pored over them once he did, and has written and spoken extensively on his findings, overcoming along the way attempts by the Obama campaign to silence him.

As per Kurtz's article in the Wall Street Journal of September 23, 2008, Obama and Ayers Pushed Radicalism On Schools, [emphasis added]: "documents in the CAC archives make clear that Mr. Ayers and Mr. Obama were partners in the CAC," and Ayers approved the appointment of Obama as CAC chairman. Moreover, "documents show that Mr. Ayers sat as an ex-officio member of the board Mr. Obama chaired through CAC's first year. He also served on the board's governance committee with Mr. Obama, and worked with him to craft CAC bylaws. Mr. Ayers made presentations to board meetings chaired by Mr. Obama. Mr. Ayers spoke for the Collaborative before the board. Likewise, Mr. Obama periodically spoke for the board at meetings of the Collaborative."

In spite of Sen. Barack Obama's claims to the contrary, the Democratic presidential nominee had a close working relationship with former Weathermen terrorist leader William Ayers when the two served alongside each other on a hundred-million-dollar education foundation, according to the group's own archived records.

In addition to citing Kurtz's research into the Obama-Ayers connection at CAC, the WND article notes:

The CAC is not Obama's only working relationship with the unrepentant terrorist. In a widely circulated article, WND first reported Obama served on the board of the Wood's Fund, a liberal Chicago nonprofit, alongside Ayers from 1999 to Dec. 11, 2002, according to the Fund's website. According to tax filings, Obama received compensation of $6,000 per year for his service in 1999 and 2000. The "Friends of Barack Obama" campaign fund lists a $200 campaign contribution from Ayers April 2, 2001. The two appeared together as speakers at several public events, including a 1997 University of Chicago panel entitled, "Should a child ever be called a 'super predator?'" and another panel for the University of Illinois in April 2002 entitled, "Intellectuals: Who Needs Them?"